On June 18, 1812, the U.S. entered the War of 1812 as Congress declared war on Britain due to disagreements over neutrality laws and the impressment of American sailors by the British Navy. North Carolina soldiers fought for the national army and for local militia during the war.  A variety of weapons were available, ranging from traditional muskets to gunships. The war led to improvements in existing weaponry and the development of new weapons.

The majority of the weapons in the war were infantry small arms weapons. The main weapon for American foot soldiers was the Springfield Model 1795 Musket. Manufactured in Springfield Armory, located in Springfield, Massachusetts, this muzzle-loaded, smooth-bore firearm was the first model manufactured by the US government. It was a copy of the French flintlock musket model of 1763. The musket had overall length of around 60 inches, a caliber of .69 inches, and weighed about 9 pounds with a bayonet attached. The bayonet was a 15 inch long, spade type blade used for hand to hand combat. The firing quality of this model was assumed to be better than most models of the time since it was copied from the French musket. Even so, with every shot the carbon buildup within the barrel caused the bullet to bounce around in the barrel, leaving with an unpredictable flight pattern. With observed flaws seen in this musket, a new model, the 1812, was developed but it would not see action in the war. The United States’ capability to provide their army with adequate weapons showed the independence of the nation and its ability to arm itself without help. The army even developed special regiments for certain specialized situations.

One of the newest technological advances was the introduction of the rifle. Rifles were significantly more accurate than the smooth-bore muskets due to the spiral grooves called rifling made inside the barrel. The rifling gave the bullet, or ball, a spin on exit, stabilizing the projectiles flight and increasing accuracy. The accuracy did come with a downside --  the reloading was slower than a musket, and burnt gunpowder buildup from repeated firing made it eventually impossible to fire without cleaning. Regiments of riflemen had already been established in 1808 in reaction to the war in Europe. These companies were provided the U.S. Model 1803 Rifle also manufactured at the Harper’s Ferry Armory. The rifles were flintlock, .54 inch caliber, and 32 inches long. No bayonet was provided with the rifle, giving the soldiers a major disadvantage in close combat. With these overwhelming shortcomings, however, the musket was still relied on as the prominent infantry weapon. Rifled muskets would eventually become the standard, with the invention of the French Minié ball bullet, and would become the common weapon in the American Civil War. 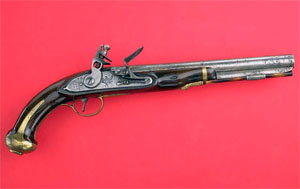 A special regiment of soldiers raised on a needed basis were the Light Dragoons. These dragoons consisted of a small group of soldiers on horseback. During the War of 1812, pistols and sabers were only issued to dragoons. The prominent pistol issued was the Model 1805 Flintlock Pistol. The Model 1805 was made at Harper’s Ferry Armory in Virginia, making it the first American manufactured military pistol. They were .56 inch caliber, muzzle-loaded, smooth-bore and were about 16 inches in length. The pistols were built in pairs and given the same serial number.

The sabers provided were most commonly Starr sabers. Leading up to and during the war, Nathan Starr was granted multiple contracts to supply horsemen’s swords  based off a pattern by William Rose, who also provided sabers for the dragoons. The saber was a single-edged, curved iron blade. It was 38 ¾ inches in length with a 1 ⅜ inch wide blade. The difference between the two designs was that Starr’s model had a leather scabbard instead of iron. With only a handful of light dragoons called into service, not many of these weapons were used, and swords were becoming more of an officer’s weapon. 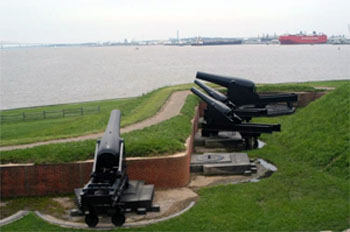 The war also saw use of field artillery. Field artillery was comprised of guns and howitzers. Guns, often referred to as cannons, were large barreled weapons designed to fire their projectiles at the highest possible velocity in an attempt to have the greatest range and maximum impact speed. The most common field gun was the 6-pounder, named for the weight of the iron ball projectile associated with a 3.67 inch bore diameter. America had a very good supply of high grade iron ore, leading to casting the guns in heavier iron which was cheaper and stronger than bronze guns which were used by the British. The cast was then drilled out from the muzzle to the specified bore size. At the breech, or back of the gun, a vent was drilled allowing for ignition of the powder propellant. On either side of the barrel were trunnions, or projections, used to seat the gun on a carriage that could be pulled by horse allowing for easy movement. The combined weight of the weapon was about 2,000 pounds and had recoil between four to six feet. This required it to be returned to firing position which took large individuals; thus, only the biggest, strongest soldiers operated the guns. 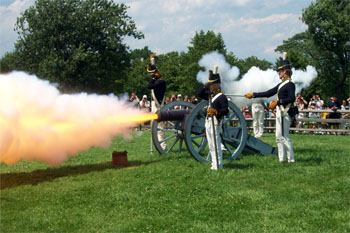 Howitzers were smaller guns, or cannon, used to launch projectiles on a curved path at short ranges. They were shorter and designated by the bore diameter in inches. Typical bore size was 5 ½ inches and could accommodate multiple types of ammunition. It could fire large iron balls like the guns, and it could fire explosive balls filled with gunpowder. The ball would explode after its fuse burned to the powder, sending shrapnel over the battle area.

The artillery at the Battle of Chippewa on July 5, 1814 was a force supporting the charge of General Winfield Scott’s brigade. The American artillery was faster and more accurate than the British leading to victory. The British also failed to take Baltimore on September 13, 1814, when they lost the artillery battle to capture Fort McHenry. This would lead to the penning of our Nation Anthem by Francis Scott Key while watching this battle.

The use of forts was continued from their use in the Revolutionary War. Forts were military structures built for defense. In 1807, when the U.S. saw that war was imminent with Britain, officials began plans for a new chain of coastal forts. One such fort was North Carolina’s Fort Hampton located at the point of Bogue Banks on the west side of Beaufort Inlet for protection of Beaufort Harbor. In November 1807, the North Carolina Assembly encouraged the federal government to build the fort and construction began in 1808. The fort was finished in January, 1809, and named for North Carolina Revolutionary War hero Colonel Andrew Hampton.

The fort was the smallest of the federal government forts of the time, but was typical of the others in its shape. It had a horseshoe-shaped barrier wall facing the inlet made of oyster shell cement 14 feet thick at the bottom and 8 feet at the top. Behind the wall were 5 18-pounder guns which had a range of about one mile. At the back of the fort in each prong of the horseshoe were gaps for riflemen to fire through. The barracks building closing off the horseshoe could house 50 men and was next to a brick building housing the gunpowder. During the war, the British warships kept their distance in belief that the fort was formidable, even though they had never attacked it. This was fortunate because at many times the fort was un-manned and deteriorating. Many times, army regulars were called away for other service leaving the fort empty, only to be filled by local militia after being dispatched by Governor William Hawkins. The fort never saw any real battle and was abandoned after the war. Eventually years after, beach erosion claimed the fort to the sea. After the war, the government built a third wave of advanced forts along the east coast, shoring up the defense of the Atlantic coast. 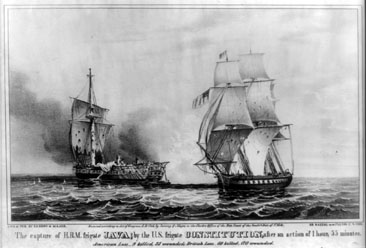 Due to the British naval impressment, much of the War of 1812 was fought at sea. To combat Britain’s warships, the U.S. had many gunboats commissioned in advance of the war by President Thomas Jefferson. These Jeffersonian gunboats were planned for coastal defense and for use on the western rivers. These small ships ranged from 50 to 75 feet long and 18 feet wide and sat shallow in water for use in shoal and inland waters. They were furnished with many types of sails, oars, and crews of around 20. Each ship carried two to three guns ranging from swivel-mounted 18- to 24-pounders to 32-pounders on traversing carriages. North Carolina port cites were responsible for building 177 of these gunboats, three of which were contracted to Amos Perry. Gunboat 166, named Alligator, was used in the war as a patrol for the southern coast and saw action against the British. 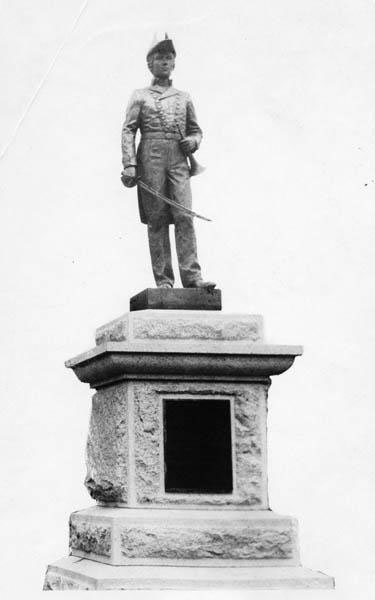 North Carolina was also home to naval heroes Otway Burns and Johnston Blakeley. Burns was captain of the Snap Dragon, the most successful North Carolina privately owned and crewed ship in combat with the British navy. Blakeley was captain of the privately owned and crewed Wasp. His successful combat was against British shipping along the western coast of Europe. After the war, most of the gunboats were sold out of service. The U.S. capacity to create gunboats and other warships provided the assurance of that the nation would be defended at sea, and that the battle could be taken to the enemy, to prevent casualties in the home land.

In the War of 1812, many weapons were used to combat the British. They ranged from small arms as small as pistols to structures as large as forts. For this war, the U.S. armories manufactured the first American-made military weapons, leading to a confidence that the U.S. was an independent nation that could arm and defend itself in world and civil conflicts. The weapons created were innovative and tested, and some innovations would become standard attributes for all future weapons such as rifling.  The continued advancement of weapons from this point on would make the United States armed forces the most powerful in the world.

Peterson, Harold L. 1965. The American sword, 1775-1945; a survey of the swords worn by the uniformed forces of the United States from the Revolution to the close of World War II. Philadelphia: Ray Riling Arms Books Co.

I have a sword with the sate

I have a sword with the sate of the Battle of New orleans ingraved on it and the name Andrew Johnston ingrained on it
It's a labor measuring about 30" from tip to end of the handle.
Its difficult to make out the manufacture's name but it looks like "P.MMRCHT"
It was given to me by a family member who received it from another person.
Can you help me with any information about the sword that you can?
I can send photos if you send me an email address.

Thank you for contacting

Thank you for contacting NCpedia! Your sword sounds really interesting. I think the best place to contact is the N.C. Museum of History. They have curators who are very knowledgable about artifacts and can help you possibly find information. Here is a link on how to do that: https://www.ncmuseumofhistory.org/collections/contact-expert