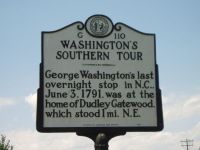 George Washington, Revolutionary War hero elected as the first president of the United States in February 1789, is one of the most celebrated figures in American history. For more than two centuries, the story of his eventful life has been marked by both truth and legend. The concept of the presidency was new, and Washington was fully aware that his decisions would set precedents. He resolved to tour the United States to observe political climate and culture, to thank his supporters, and to instill a sense of unity in the new country. As such, his tour and stops along the way became important landmarks in the areas he touched. Washington’s stature in history is almost mythical, and has given rise to the popular claim—in well-known towns and obscure hamlets along the Eastern Seaboard—that “George Washington Slept Here.” The claims are not surprising, however, as Washington saw more of his country while in office than any other American president before the twentieth century. He also kept a detailed diary chronicling his travels.

While on tour, he sought differing viewpoints and wanted to see and be seen by as many people as possible. Soon after taking office, he planned and undertook a successful 28-day tour of New England. In early 1791, after establishing a site for the new “Federal District” along the Potomac River, Washington embarked on a tour of the Southern states—a product of his desire to visit every state during his term of office. Proceeding from Mount Vernon via Fredericksburg and Richmond (Virginia) into North Carolina, Washington crossed the Roanoke River into Halifax in mid-April 1791. From there, the President’s carriage tour took him through Tarboro, Greenville, New Bern, Trenton, and Wilmington before entering South Carolina. Washington re-entered North Carolina near Charlotte and traveled northward, visiting Salisbury, Salem, and Guilford Court House.

Washington left Salem and continued northward toward Rockingham County and Virginia. His accommodations on the night of Friday, June 3, were at “one Gatewood’s within two Miles of Dix’ ferry over the Dan (River), at least thirty Miles from the Iron works,” according to his diary. Earlier that day he had breakfasted at Troublesome Iron Works in Rockingham County. Of the countryside Washington noted that the “Lands over which I passed this day were of various qualities and as I approached the Dan, were a good deal covered with pine.”

The owner of the cabin where Washington slept was Dudley Gatewood who in 1790 had been appointed one of the trustees responsible for assisting navigation on the Roanoke River. Gatewood appears in local records as early as 1777 and acquired land on Hogan Creek through inheritance and through a 1784 purchase. The property was passed down through the Gatewood family (from which the community takes its name) and was in time known as the “Whit” Gatewood place. The Gatewood house stood as recently as 1975, when it was occupied by tenant farmers, but since has deteriorated and been dismantled. Portions of the building were moved to Hillsborough.

William G. Clotworthy, In the Footsteps of George Washington (2002).

William S. Powell, When the Past Refused to Die: A History of Caswell County (1977).