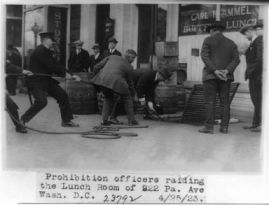 In 1923 Zebulon Vance Turlington (1877-1969) of Iredell County introduced a measure in the General Assembly to make the state's law conform to the Eighteenth (Prohibition) Amendment to the U.S. Constitution and the Federal Volstead Act. Authorship of the Turlington Act is attributed to Heriot Clarkson, of Charlotte, a vehement prohibitionist who subsequently served on the North Carolina Supreme Court. The act defined the alcoholic content of beverages and made it illegal "to manufacture, sell, barter, transport, import, export, deliver, furnish, purchase, or possess intoxicating liquor." Sacramental and medical uses were permitted. Personal consumption of alcohol was legal only in the home, but the law remained silent on the illegality of obtaining and transporting the contraband to the home.

"Wet" forces tried unsuccessfully to repeal the act, particularly after the end of national Prohibition in 1933. In 1935 the General Assembly passed the New Hanover Act and the Pasquotank Act. These counties and 16 others were authorized to decide by local option vote whether or not to permit liquor sales. Based on the findings of a commission headed by Victor S. Bryant, the legislature passed "An Act to Provide for the Manufacture, Sale, and Control of Alcoholic Beverages in North Carolina." This ABC law established state control over the sale of alcohol in those areas that permitted liquor sales. As late as 1966, state supreme court justice Susie Sharp ruled that "the Turlington Act is still the primary law in every area which has not elected to come under the ABC Act."