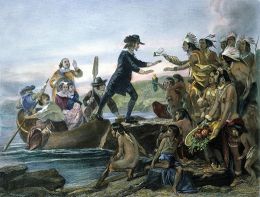 Tryon's Line, running roughly north to south across western North Carolina, came about as a result of the Royal Proclamation of 1763 at the end of the French and Indian War. It was intended to stop conflict between encroaching white settlers and the American Indians, whose land was being occupied. Officials delayed the running of the line for a time to allow the Cherokee a full hunting season. With much pomp and an impressive show of authority, Governor William Tryon initiated the survey on 4 June 1767 following a formal observance of the birthday of King George III. After two days in the field, Tryon returned to New Bern, leaving the actual running of the line to an appointed three-man commission. The work was completed on 13 June, but the Indians agreed to delay the enforcement of the provisions until the end of the growing season so that settlers whose farms now fell within the Indians' domain could harvest their crops.

Initially the establishment of Tryon's Line was beneficial, but as the white population grew the purpose and authority of the line were ignored. Before the beginning of the American Revolution, North Carolina's frontier families and Indians had reverted to their former conflicts.

Proclamation of 1763 was intended to stop colonists from taking advantage of American Indians in trade and land. Image courtesy of Smithsonian Magazine from the Granger Collection, NYC. Available from http://www.smithsonianmag.com/history-archaeology/John-M-Barry-on-Roger-Williams-and-the-Indians.html# (accessed May 24, 2012).