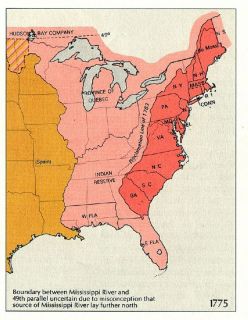 The Proclamation of 1763 is intimately tied to the history of English-Native American relations during the colonial era. The purpose of the proclamation was to stop white settlers or traders from exploiting American Indians. Although that relationship varied from one colony to another, by the eighteenth century most coastal tribes had already been decimated by disease or war or had moved westward. But even those who migrated to the interior came to rely on European trade, a fact that led to destructive competition among the tribes. Determined to preserve their way of life before the European advance, several northern tribes led by Pontiac, an Ottawa chief, launched a major offensive against English forts in the west. This episode, known as Pontiac's Conspiracy, prompted the English government to issue the Proclamation of 1763.

This decree established the governments of East and West Florida and Quebec, reserved the enormous western lands outside of these areas to Native Americans, imposed strict regulations on the fur trade, and required the approval of royal officials of any land purchases in the future. If the proclamation was to preserve peace on the frontier, it was also designed to limit the areas of white settlement and thereby keep the growing rebellious attitude of the colonists under close scrutiny. The line of 1763, beyond which white settlers could not advance, extended across the western border of North Carolina. At this time, however, England's new policy had minimal impact on the colony since white settlement there had not extended to the western line.

Hi, Um I'm doing a project for school. Are there any more facts you all could put?

Yes, we have several articles on the topic:

Hope these help with your project! Good luck!

A CLOSE AS POSSIBLE, GIVE

A CLOSE AS POSSIBLE, GIVE REFERENCE POINTS OF WHERE THIS LINE WAS IN N.C., PLEASE

Thanks for visiting NCpedia. I found a reference on ANCHOR (https://www.ncpedia.org/anchor/timeline-resistance-1763) that said the land west of the Appalachians. Here are some more resources that might be helpful:

Hello! There is a map on this

Hello! There is a map on this page that does a pretty good job, but for NC, you need to understand how county boundaries looked in the 1760s. If you go to https://www.mapofus.org/northcarolina/ and scoll down to the years, click on 1762 and you will see counties formed by then and can get a better understanding. But I do think the map that is in this article is the best one I've seen.