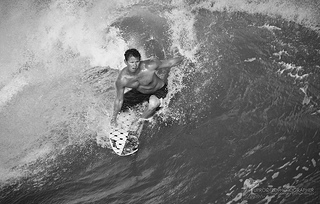 One of the first instances of a Hawaiian-type surfboard being constructed and used on the North Carolina coast was in the late 1930s, when Tom Fearing of Manteo built one so long and heavy that it took two people to carry it to the water. The riders of Fearing's board were never able to catch a wave and stand up on it Hawaiian style, but it was used extensively for years as a paddle board on which two or even three people could go out to the wrecks a quarter of a mile or so offshore for fishing. In the early 1950s, the Kitty Hawk Craft Shop was selling handmade juniper boards averaging almost 3 feet in length and 15 to 18 inches in width, which were the forerunners of the modern boogie board. By the early 1960s, similar small boards were being manufactured of Styrofoam, but neither the wooden nor Styrofoam types were large enough for stand-up surfing. At about that same time, however, modified versions of Hawaiian surfboards were appearing on North Carolina's beaches, most of them eight or ten feet in length.

The beaches north of Cape Hatteras are especially well suited for surfing because they extend in a north-south direction and receive the full effect of large waves emerging from far out in the Atlantic. Not long after the first surfers appeared on the North Carolina coast, there were signs of conflict as pier operators claimed the surfers were ruining the fishing and resort owners expressed concern over the possibility of surfers injuring bathers in the ocean surf. In most areas, the local authorities now restrict surfing to specified areas.

Riding a surfboard today is quite a different experience from riding one in the early days of North Carolina surfing. Major improvements were the addition of a fin or "skeg" at the rear of the board to serve as a fixed rudder and a leash connecting board and rider, allowing some measure of control after a fall. The greatest change, however, has been in the length of the boards, which has gradually decreased until some of the most popular boards in use for stand-up surfing are not much longer than the original handmade boogie boards.

Another form of surfing, known as windsurfing or sailboarding, has evolved for use when large waves are not available. In this form, the surfer stands on a board while using a sail instead of a wave for propulsion.