Windsurfing, or boardsailing, is a water sport enjoyed by many North Carolinians and others traveling to the state's 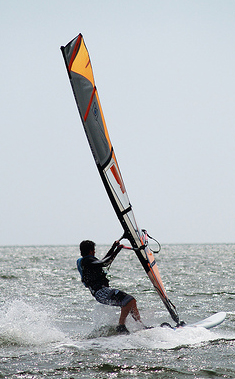 Atlantic Coast. In windsurfing, which is closely related to traditional sailing, the sailor stands on a board powered by a sail attached to it by a universal joint. Although believed to have been invented in the United States in the 1960s, the sport first gained popularity in Europe before being reimported to the United States in the 1970s. It achieved Olympic status in 1984. From the beginning, the Outer Banks of North Carolina have provided some of the best windsurfing on the East Coast. The wind is frequently ample and usually consistent, and the shallow waters of the sound make it an easy place to sail. In addition, the relative mildness of the climate makes it possible to sail throughout the year, especially if using cold-weather gear.

Ted James, who opened Fox Watersports in Buxton in 1976, was one of the first people to windsurf in waves on the Atlantic side of the Outer Banks. Rental equipment for windsurfing could be hired as early as 1978. Ralph Buxton began teaching windsurfing in Nags Head in 1980. Windsurfing did not become an economic force in North Carolina until the early 1980s. Sales of windsurfing gear and cottage rentals have become a significant industry on the Outer Banks. While the sport saw declining demographics in the United States in the 1990s, the Outer Banks still boasts several full-service windsurfing shops.

The southern Outer Banks sees the most windsurfing activity. Cottages have been built directly on the water to rent to windsurfers. The "Canadian Hole," a launch site located about two miles north of Buxton, was named for the many visitors from Canada. Although the Outer Banks remains the epicenter of windsurfing in North Carolina, other coastal locations such as Wilmington, Bogue Sound, and sites near Morehead City (Harkers Island) also provide good sailing venues and a range of conditions.

Inland lake windsurfing may actually be the norm for most sailors in North Carolina. A necessary precondition for inland windsurfing in North Carolina was the creation of large, man-made facilities such as the B. Everett Jordan Lake and Lake Norman. Local windsurfing clubs such as the Triangle Boardsailing Club, the Triad Windsurfing Club, and the International Board Sailing Club of Charlotte have actively promoted the sport since the late 1970s by sponsoring races, regattas, and instruction, and by promoting clean water and free access. MindJibe, the newsletter of the Triangle Boardsailing Club, has been published since the early 1980s.