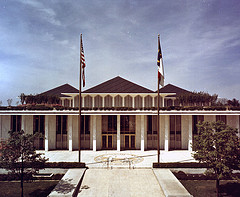 The State Legislative Building in Raleigh was authorized by the North Carolina General Assembly of 1959 to be built as a permanent home for the legislative branch of the state government. The 1957 General Assembly had created the State Legislative Building Commission of seven members, chaired by Thomas J. White. The bill creating this commission emphasized that the purpose of the building was to house only the legislative branch and its auxiliaries. The Legislative Building Commission was given authority to acquire land, hire architects, approve plans and specifications, enter into contracts for the state, and expend funds for the construction, furnishing, and equipping of the building for $4.5 million. The architects for the building were Edward D. Stone, John Holloway, and Ralph Reeves. The commission chose a 5.5-acre site a block north of the State Capitol. It contained two city blocks; Halifax Street between Jones and Lane Streets was closed to join the blocks. The site is bounded by Jones, Salisbury, Lane, and Wilmington Streets. Bids for the building were received in December 1960, and construction was begun by Rea Construction Company in early 1961. In 1961 the General Assembly added another $1 million for the building. Total costs were $5.5 million, or $1.24 for every citizens of North Carolina at the time. The building was first occupied by the General Assembly on 6 Feb. 1963. 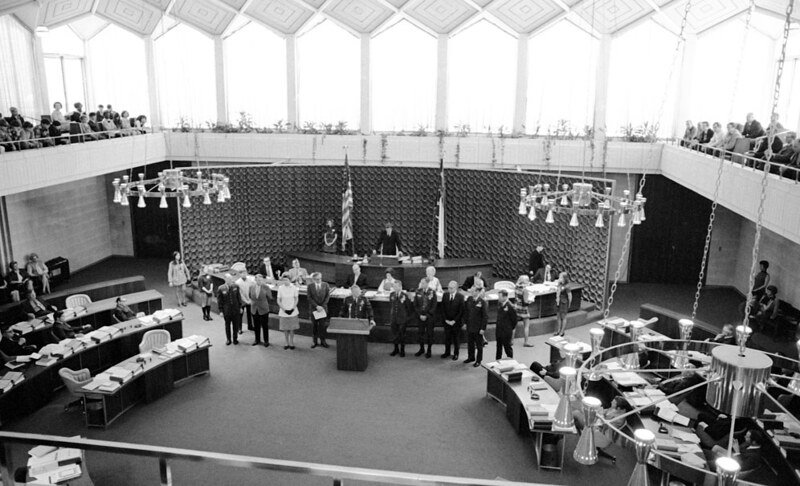 The State Legislative Building was described by one reporter at the structure's dedication as North Carolina's "pagoda" because of its copper-covered, pyramidal roofs and indoor and outdoor gardens. It is a modern, functional, and artistic building with elements of historical style and structure. The building is 242 feet square, on a 340-foot base podium of North Carolina granite, with walls and columns of Vermont marble. The columns form a colonnade surrounding the building reaching 24 feet from the podium to the roof of the second floor.

A 28-foot terrazzo mosaic of the Great Seal of North Carolina covers the podium leading to the main entrance. Inside, the 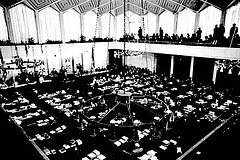 red-carpeted, 22-foot-wide stairs extend to the third floor and the public galleries of the House and Senate. Unique garden courtyards are surrounded by committee rooms and members' offices. The House and Senate chambers are on the second floor. Each chamber is 5,180 square feet; they occupy the west and east wings and are divided by a rotunda. When their main brass doors are opened, the presiding officers of each chamber face each other. Massive brass chandeliers accent the natural lighting provided by windows and skylights. American walnut, brass, red carpets, and gold-and-black upholstery add to the building's character. Renovations to the building in the 1980s created more offices and expanded meeting rooms.

In 1982 the Legislative Office Building on Jones Street opened. Approximately one-half of the members of the General Assembly have moved their offices there, as have several of the support divisions of legislative services. The west side of the Legislative Building faces a long plaza surrounded by government office buildings, and to the east are the North Carolina Museum of History and the North Carolina Museum of Natural Sciences.