Smokehouses, sometimes called meat houses, have been used in North Carolina since the early 1700s as a means of preserving meats through exposure 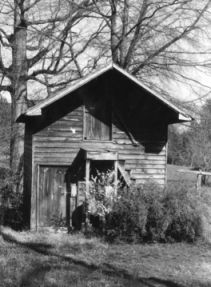 to a constant, concentrated smoke. Typically situated near the kitchen, the smokehouse was one of the most important domestic outbuildings in North Carolina homesteads in the days before freeze-drying, deep-freezing, and vacuum packaging. In November, when the weather turned cold, hogs were slaughtered and the meat saturated with a heavy coating of salt. After hanging the hams from hooks within the smokehouse, a fire was started to provide the smoke necessary to cure the meat. This fire was often started in the middle of the dirt floor, but sometimes a large wash pot was stuffed with wood, ignited, smothered, and left to smolder in the middle of the smokehouse. The smoking of hams or other meats could go on for days or even weeks, depending on the desired product. 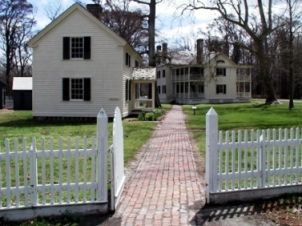 Log smokehouses predominated in the western part of North Carolina, while frame construction was more prevalent in the east. Log smokehouses were chinked in order to prevent freezing inside and to keep vermin and insects out. Additionally, a stone or concrete barrier was placed about six inches deep around the smokehouse to keep rats from tunneling into the smokehouse. Double-stud construction of smokehouses was used for two reasons. The weight of a number of curing hams was quite considerable, and the close studs helped support the structure against collapse. Double-studded smokehouses were also constructed in hopes of repelling thieves of the two-legged variety. Somerset Plantation, in Washington County, has a good example of a large smokehouse with studs to discourage theft. If a thief was tempted by the smell of smoked meat and pried off the weatherboarding to help himself, he would not be able to fit between the studs.

Emphasizing the importance placed on the smokehouse and its contents is the fact that many main houses remained open and unlocked while smokehouses were securely padlocked and bolted. Some smokehouses doubled as potato houses and canned good storage; the loss of these necessities was to be guarded against at virtually any cost.