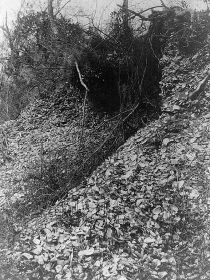 Large amounts of discarded shells, left in mounds along the coast by early Indian communities, often provide clear evidence of the people who once inhabited the region that became North Carolina. Shellfish were an abundant food source for Native Americans. Shell mounds have been found composed almost entirely of oyster shells (the Cape Creek site on Hatteras Island) or clam and mussel shells (archaeological sites along the Pamlico River). Archaeologists have determined that the creation of these shell mounds began more than 1,000 years ago; it is suggested that the mounds are evidence of seasonal subsistence camps. Sites such as those found on Colington and Roanoke Islands are thought to be primarily shellfish collecting camps. From these shell mounds, archaeologists have concluded that these native peoples were hunter-fisher-gatherers living off what the land afforded. Although the sites appear to have been largely based on the accumulated shells, they were probably occupied for only one season by a few extended families. Inland ravine shell mound sites have the same subsistence pattern but reflect adaptations to shellfish species of the river environment.

Mark A. Mathis and Jeffrey Crow, eds., The Prehistory of North Carolina: An Archaeological Symposium (1983).