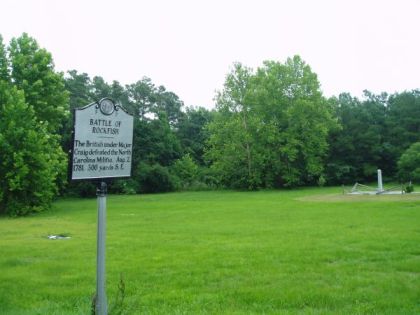 The Revolutionary War engagement called the Battle of Rockfish took place on 2 Aug. 1781 at Rockfish Creek, about one mile south of the present town of Wallace in Duplin County. Earlier that year, on 28 January, a British force led by Maj. James H. Craig had taken possession of the nearby port and town of Wilmington. Under his command were 18 vessels with a full supply of provisions and munitions and 400 regular troops, artillery, and dragoons. Craig used Wilmington as a base from which to foray into the countryside, arresting Whigs and enlisting Loyalists. In the early summer, he issued a proclamation that all men in the surrounding counties were British subjects and must enroll as Loyalist militia. Those who did not do so by 1 August would be harassed and their property seized and sold. On the last day of grace, Craig began to march through the eastern counties.

At Rockfish Creek, he encountered a Whig militia that was ready to contest his passage. Craig advanced with approximately 500 troops and attacked. Sources tell conflicting stories of the battle, although clearly the British prevailed. Craig, with 60 horses and 2 infantry companies, probably was able to encircle the Patriots and surprise them. Half of the Patriots fled before they had a chance to fire their weapons, which apparently were in short supply. It was reported that approximately 30 or 40 Patriots were taken prisoner.

Although the victor at Rockfish, Craig was forced to retreat after 17 Oct. 1781, when Lord Charles Cornwallis surrendered to Gen. George Washington at Yorktown, Va. Craig destroyed any guns, munitions, and supplies that he could not take with him and sailed with his troops to Charles Towne (Charleston, S.C.).

I just recently became aware that my 5 great grandfather was at this Rockfish Creek battle. Is there any books or publications where I can find out more. He was a private in the N.C. militia and I would love to find out more. I appreciate any help.

Thank you for commenting. I'm am sending this to our referene librarians who can assist you further.

Our library has a lot of information for Revolutionarty War state militia; however, we do not have any books specific to the Battle of Rockfish. We do have a digital collection for troop returns that you can check out. https://digital.ncdcr.gov/digital/custom/troop-returns

Is there a roster of men who

Is there a roster of men who served in the Duplin militia? I have a number of ancestors from the area. Thanks.

Thank you for commenting. I'm am sending this to our referene librarians who can assist you. Our library has a lot of information for Revolutionarty War state militia. We do have a digital collection for troop returns that you can check out. https://digital.ncdcr.gov/digital/custom/troop-returns

A large celebration of the

A large celebration of the Rockfish battle is coming and it would be great to supply that celebration with names of all our soldiers from this area.

Thank you for contacting NCpedia. You may want to contact the State Archives of North Carolina (https://archives.ncdcr.gov/) for more information on Rockfish Battle. You may also contact us at the Government & Heritage Library (https://statelibrary.ncdcr.gov/ghl) for any assistance.

in my family research, I have

in my family research, I have discovered that there is a family cemetery in Duplin County . one piece of information states that it is near Rockfish NC; the other states that it is near Wallace NC we have one picture of the family plot:
Alderman family . the DAR of NC did the grave stone for my 4th great grandfather John Alderman We are trying to find exactly where this cemetery is Can you help? thank you!!

Hello. I am the treasurer

Hello. I am the treasurer for the Alderman Historical Assoc. My husband is president and a descendant. Email me for more information. It is on Powell Page Rd in Duplin County on private land but my husband would be glad to take you there.

I am wondering who was in

I am wondering who was in battle against Craig in the Rockfish battle in Wallace. Would be interesting for the history of Wallace area.

I have family from Duplin

I have family from Duplin County who were in the Duplin County Militia, but I haven't seen that they were at Rockfish. I also though have family who were in the Bladen County Militia and were definitely at Rockfish - according to their pension files, they were wounded in the retreat. Bladen County was really big back in those days and my ancestors actually lived in what is today Robeson County.