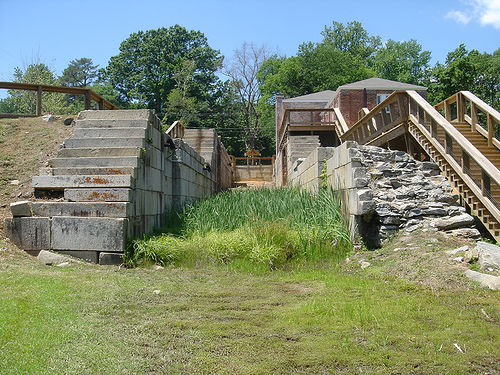 The Roanoke River, by far the largest river in terms of water flow in North Carolina, was for centuries a path of commerce and travel, first by American Indians and later by European settlers. In 1812 North Carolina lawmakers directed the subscription of shares in the new Roanoke Navigation Company, formed to build and maintain internal improvements that would promote commercial navigation on the Roanoke and its tributaries. Although the company was chartered in 1812 by the state legislature, the cooperation of Virginia would be needed to secure the benefits of a commercial waterway reaching deeply into the interior. In December 1815 Col. William Lewis traveled in a bateau from Greenhill, Va., on the Staunton River, to Norfolk. His successful journey convinced the Virginia General Assembly of the practicality of commercial navigation on the Roanoke River system, and a charter was approved. Later, Virginia investors gained control through stock acquisitions. Almost all of the stockholders were businessmen with interests nearby or upriver.

The Roanoke River system consisted of three major components: the lower 100-mile portion of the Roanoke River between Weldon and the Albemarle Sound; a nine-mile network of locks, basins, and a canal at the falls at Weldon; and the upper 300-mile stretch of rivers that reached to the foot of the Blue Ridge Mountains. The canal itself was to be about 15 feet deep and 40 feet wide, with a 10-foot-wide towpath alongside it.

By 1828 the lower Roanoke was improved to allow navigation by steam-powered vessels, and the steamer Petersburg was placed in service carrying cargo from Weldon to Norfolk. The same year it was possible to traverse the Staunton as far as Salem, Va. The Dan River could be navigated by bateau as far as Leaksville in 1828, although it remained impeded until 1834. The Dan was improved and eventually made navigable as far as Madison. The Staunton was opened to Clark's Landing, Va.

For over a decade, the Roanoke Canal prospered, transporting vessels powered by tow animals, sail, and steam. The legislatures of North Carolina and Virginia contributed funds and bought bonds in the company, viewing the canal as part of a project to complete and improve both it and a canal through the Dismal Swamp to Norfolk. Beginning in 1831, fairly steady annual dividends enabled the company to finance waterway improvements extending over 244 miles of river above the canal, as far as Rockingham County on the Dan and Salem, Va., on the Roanoke.

When the Petersburg Railroad in Virginia reached the Roanoke just across from Weldon in 1833, the "iron horse," free from rivers and almost never halted as canals were, cast the die against the Roanoke Navigation Company and similar operations. As other rail lines were built, the canal's revenues plummeted, and the Roanoke Navigation Company produced its last detailed annual report in 1855. As traffic disappeared, the property fell into disrepair. In 1875 the North Carolina General Assembly ordered that Roanoke Navigation be dissolved and its property sold. The canal would never again play a role in transportation. The company was one of only three such public improvement companies in North Carolina that ever returned money to its investors, paying over its lifetime 57.25 percent of stock prices in dividends.

In 1885 several wealthy businessmen, many from Petersburg, Va., purchased the Roanoke Canal property for $19,525. The new company, the Roanoke Navigation and Water Power Company, sought manufacturing, milling, and foundry operations to use the canal's water. After some success, company directors announced in 1890 a much more notable goal: using the canal to generate electricity. By 1892 generators were in place at both Weldon and the middle locks, and the Roanoke Canal was supplying the first electric power to Weldon and its environs. Weldon soon boasted new cottonseed, corn, and peanut mills, cotton yarn and fabric mills, and a large winery and bottling plant. As a result of Roanoke Canal electricity, the hamlets of Rosemary and Roanoke Junction developed, near the middle locks, into present-day Roanoke Rapids.

Physical evidence of the Roanoke Canal remains, largely because of the work of preservationists. Weldon, laid out in 1820, is the only surviving municipality created primarily by the canal's construction. The beautiful, impressive stone aqueduct in Weldon that carried the canal over Chockoyotte Creek has been preserved, as have the walls of the combined locks in Roanoke Rapids.