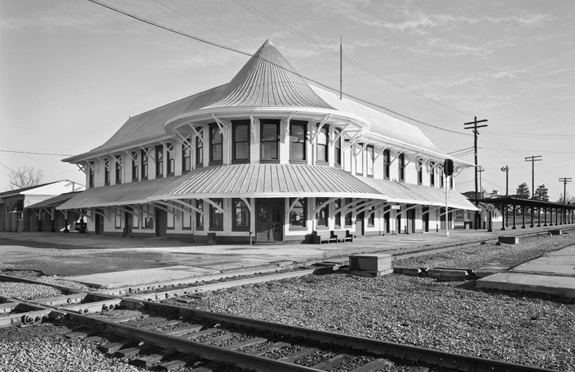 At the beginning of the twentieth century, North Carolina was served by about 30 short lines and three major railway systems: J. P. Morgan's Southern Railway Company, which controlled the Western North Carolina Railroad Company and had signed a 99-year lease of the North Carolina Railroad in 1895; the Atlantic Coast Line Railroad, the result of the consolidation of more than 100 railroad companies from Virginia to Florida, including the Wilmington & Weldon Railroad; and the Seaboard Air Line system, which absorbed the Raleigh & Gaston and the Central Carolina Railroads. The most significant new tracklaying of the era was the construction of what came to be known as the Carolina, Clinchfield, and Ohio Railroad from Kentucky across the Appalachian Mountains into North Carolina, thereby connecting the state and the Atlantic Coast with the Ohio River Valley and the valuable coal and iron ore deposits along its route.

In 1920 North Carolina reached a peak of 5,522 miles of track. As the twentieth century progressed, the importance of the railroad industry to the state's economy began to decline as a result of growing competition from the trucking and, eventually, airline industries. By the 1920s truck traffic had begun to take away much of the railroads' business in small ("less than a car load") lots. Government regulation, originally intended to prevent the gouging of farmers and small business people by the all-powerful railroads, came to discourage innovation and modernization of the freight system and to favor trucks for many commodities formerly carried by rail.

After World War II, the steady loss of passenger traffic to the automobile led many railway companies to abandon money-losing passenger service. By the 1970s, railroads both in the state and throughout the nation were doing poorly financially. With deregulation, they were free to turn away small lots, most of which went to trucks anyway, and concentrate on carrying bulk loads. In 1970 the federal government attempted to restore passenger service by instituting the National Rail Passenger System, or Amtrak.

By 1970 railroad track in the state had dropped to 4,349 miles and consolidation continued to shrink the roster of railroad companies. In 1967 the Atlantic Coast Line and the Seaboard Air Line had merged to form the Seaboard Coast Line Railroad. In the 1970s the Clinchfield Railroad and the Seaboard Coast Line became part of the CSX Transportation Company. In 1982 the Southern Railway merged with the Norfolk & Western to become the Norfolk Southern Corporation. The State Utilities Commission estimated that in 1993 the railroad industry in North Carolina possessed almost $17 billion in assets, with revenues of $450 million. In 1998 private shareholders of the North Carolina Railroad agreed to sell their shares to the state after dissatisfaction arose with the terms of the renewal of the road's lease to the Norfolk Southern Corporation in 1995. By the early 2000s, North Carolina was still served by the Norfolk Southern and CSX as well as more than 20 independent short lines using more than 3,500 miles of track.

After 1971 the federal government had gained control over almost all passenger traffic. Amtrak continued to run a number of famous "name" trains through North Carolina, such as the Crescent from New York City to New Orleans (passing through Greensboro and Charlotte), and trains between Florida and the North, such as the Silver Star, Silver Palm, and Silver Meteor. Except for the state-owned Piedmont (Raleigh to Charlotte) and the state-supported Amtrak Carolinian (New York to Charlotte), however, stops and schedules were based on the needs of the northern origination points and their destinations. Tourist trains for the general public were provided by the Great Smoky Mountains Railway in western Carolina, the Tweetsie Railroad near Blowing Rock, Spencer Shops (part of the North Carolina Transportation Museum), and the New Hope Valley Railroad near Raleigh. The National Railroad Museum and Hall of Fame is located in Hamlet.

Freight has continued to be the major source of revenue for railroads in North Carolina, but its nature has changed. In the first century of rail freight, cars were small and railroads had stations in every small community along the line. Incoming and outgoing freight could be shipped in small quantities. Indeed, dairy farmers could transport individual milk cans to creameries in the larger cities. Individuals could send packages by way of express companies that operated their own railway cars, such as Adams Express, the Southern Express Company, and later the Railway Express Agency.

In much of the United States, even greater efficiency in bulk freight shipments comes from the use of containerized shipping, in which a sealed container leaves its point of origin on a truck trailer and is lifted off the vehicle at special "intermodal facilities" or transfer yards, such as those at Charlotte or Greensboro, and onto train cars. The container is then off-loaded at its destination to another truck or directly into a container ship at ports like Wilmington or Morehead City. North Carolina has not seen extensive use of containers, since most of that shipping originates on the West Coast or in the Northeast, but the 1998 acquisition of Conrail, the primary railroad of the Northeast, by the two major railroads that serve North Carolina, CSX and Norfolk Southern, has led to some increase in this practice.

Hints on the internal improvement of North Carolina: respectfully addressed to his countrymen, by a North Carolinian. New York: J.F. Trow. 1854.

An 1874 engraving shows the roundhouse and machine shops of the Raleigh & Gaston Railroad in Raleigh. North Carolina Collection, University of North Carolina at Chapel Hill Library.

The Seaboard Air Line Depot at Hamlet was built in 1900, at the site where north-south lines between the Northeast and Florida crossed the east-west Wilmington-Charlotte route. Photograph by Tim Buchman. Courtesy of Preservation North Carolina.