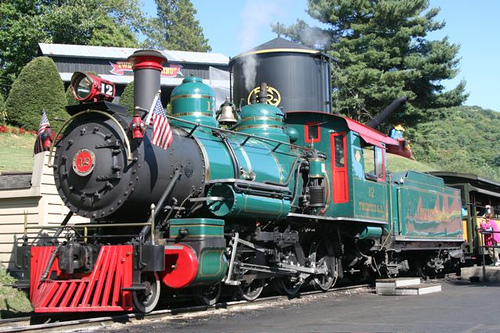 Tweetsie Railroad, the central attraction of a "Wild West" theme park of the same name in Watauga County, dates back to 1866, when the Tennessee legislature granted the East Tennessee & Western North Carolina Railroad Company (ET&WNC) permission to construct a 34-mile line through the rugged Blue Ridge chain from Johnson City, Tenn., to the iron mines in Cranberry, N.C. Philadelphia engineer Col. Thomas Matson supervised construction, and the railroad began operating in 1882. Several small logging lines were built as feeder lines to it as business boomed, especially with the purchase of the Carnegie iron furnace in Johnson City. In 1916 the line was extended to Boone, and passenger service provided access to the formerly isolated area as the railroad also brought lumber out of the mountains. Another extension expanded the line 12 more miles to Hampton, Tenn., which made Tweetsie Railroad one of the largest narrow-gauge lines in the nation. Narrow gauge means the track is only three feet wide, which is significantly narrower than most train tracks.

Destructive floods in August 1940 and competition with modern roads brought about unprofitable conditions for the railroad. On 13 July 1950, the ET&WNC officially shut down. Tweetsie Locomotive #12, the only remaining locomotive of the railroad's original 13, was bought by a group of railroad enthusiasts and moved to Virginia. Soon after, Hurricane Hazel destroyed the railroad tracks, forcing the group to sell the locomotive. It found a new owner in movie cowboy Gene Autry, who intended to use it in his films. This ownership was short-lived. Autry, unable to transport the locomotive to California, sold it for one dollar to Gene Robbins Jr., a native of the North Carolina mountains. Robbins intended to ship the locomotive back to Blowing Rock. North Carolina governor Luther Hodges declared 20 May 1956 as "Tweetsie Homecoming Day." Instead, however, the locomotive underwent extensive restoration in Hickory and was not moved to Blowing Rock until 23 May 1957, when it was accompanied by some of the original ET&WNC rail cars. Later that summer, Tweetsie Locomotive #12 and the cars made a widely welcomed maiden run on new tracks just miles from the old station in Boone. In awe of the many hairpin turns that the railroad navigated, people briefly used the nickname "Stemwinder" for the train. But "Tweetsie"-in recognition of the shrill "tweet-tweet" of the locomotive's whistle-soon became the official name.

Riding the three-mile loop on the Tweetsie Railroad is an amusing adventure that includes helping a U.S. marshal thwart the hijacking attempts of wild Indians or train robbers. Other attractions at the Tweetsie Railroad theme park include live entertainment such as the Palace Saloon Show, Bluegrass Bands, the Rainmaker, and the Tweetsie Clogging Jamboree, and a chair lift to Miner's Mountain that offers a panoramic view of the surrounding area. The Tweetsie Railroad is part of the National Registry of Historic Places.