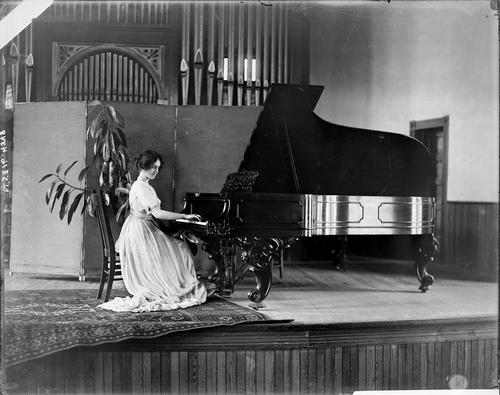 Pianos were ubiquitous in North Carolina homes, churches, and schools from the late eighteenth century to the middle of the twentieth century. By the late 1700s, pianos were imported to America by affluent families, including those living in North Carolina's coastal towns and on the large plantations of the eastern plain.

Antebellum North Carolina families could purchase a piano for between $200 and $300. Many homes had at least one instrument, and music became a focus of life, especially under the influence of German immigrants and the Moravians of Old Salem. In the antebellum period, piano playing was considered an important skill for women to learn, as it bestowed grace on the household. The piano was not associated with the fine arts during the period of its greatest popularity but was the centerpiece of home entertainment.

Through most of the nineteenth century, students learned piano playing mostly through private instructors. At least one institution offered piano instruction as early as 1800, after Moravian families requested it for their daughters enrolled in the girls' school at Salem. Raleigh's Peace College employed a German piano instructor in the 1880s, and the State Normal and Industrial School in Greensboro (later the University of North Carolina at Greensboro) offered lessons in piano playing and the playing of other stringed instruments in 1899 in order to train musicians for schools, churches, and other community groups. In 1920 State Normal was likely the first college in the South to offer a major in public school music. That year the college started the Annual High School Music Contest, further boosting interest in the piano. The contest featured 13 elite high school piano students from around the state. As an outgrowth of this contest, the North Carolina Music Teachers Association organized in 1959 at the Woman's College of the University of North Carolina (formerly State Normal). Since 1961 this organization has continued sponsoring student auditions and workshops for piano teachers.

While the earliest pianos in North Carolina were imported from Europe, by the early nineteenth century pianos were being manufactured in North Carolina and other states. Beginning in 1958, Sam Westbrook produced pianos in Marion until he sold his business in the 1970s. That manufacturing operation continued until 1982 under the name Currier. Kohler & Campbell, a New York company founded in 1896, manufactured pianos in Granite Falls, N.C., from 1954 to 1985, selling them under the names Kohler and Brambach. The Marantz Piano Company of Morganton built pianos under the names Marantz, Grand, Kincaid, and Jesse French until 1984.

North Carolina's involvement with the piano is reflected in many of its major music festivals, which feature a number of piano events. Since 1936 the Brevard Music Center and festival, held from late June to mid-August, hosts as many as 70,000 people a season. The Eastern Music Festival, resident for six weeks each summer at Guilford College in Greensboro, began in 1962 as a music camp. Over four decades it has built a reputation that draws students and faculty from most of the 50 states and a dozen foreign countries.

I saw a news video about a man who killed a Coyote on his property. The thing is, the Coyote was said to be 73lbs! So I wonder was this really a coyote, a wolf, or a cross breed?
http://abc11.com/pets-animals/orange-county-man-saves-family-from-coyote...