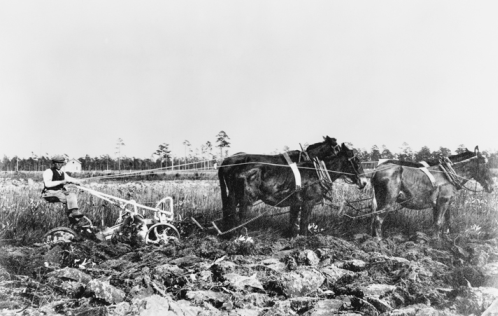 Penderlea Homesteads, a model farm community in Pender County planned by Hugh MacRae and operated by the federal government after 1934, drew its inspiration from resettlement projects founded by MacRae in the early twentieth century. Beginning in 1905, MacRae recruited European immigrants to come to southeastern North Carolina for resettlement in six cooperatively organized farm colonies along the railroad 40 miles north and west of his business operations in Wilmington. By 1908, 800 immigrants had settled in his six colonies. Initially the settlers were grouped by nationality; in time the groups became mixed. The colonies ignored traditional crops such as corn, tobacco, and cotton, concentrating instead on dairy products, fruits and vegetables, and flowers. Three of the six colonies were successes.

Castle Hayne was the most successful of MacRae's experiments. The site selected in New Hanover and Pender Counties was once a colonial plantation belonging to Roger Haynes. The settlers were principally Dutch. Their main industry was flower growing, including the cultivation of daffodils, irises, and gladioli. St. Helena, located four miles south of Burgaw in Pender County, was settled initially by Italians but populated in time by Poles, Hungarians, Austrians, Belgians, Danes, and settlers of other nationalities. A Russian Orthodox community continues to thrive and annually celebrates "Old Christmas." Marathon, settled initially by Greeks, benefited from its proximity to Castle Hayne before eventually losing its own identity and being absorbed by the latter community.

New Berlin, among the more ambitious of MacRae's homesteading projects, was nevertheless unsuccessful. MacRae plotted 193 farms and 23 town blocks to be settled by German and Hungarian immigrants. Remnants of the colony survive as the community of Delco in Columbus County. Van Eeden was settled by Dutch newcomers in Pender County, but the colony suffered from drainage problems; all evidence of the community was gone by 1939. Artesia, a Polish community between Lake Waccamaw and Whiteville in Columbus County, was also not successful.

MacRae's experience with the farm colonies benefited him almost 30 years later when he sought to develop Penderlea Homesteads. MacRae decided, during the depths of the Great Depression, to create on a grand scale a model farm community at Penderlea. As manager of the Penderlea Homesteads corporation, he was assisted by a board of directors from North Carolina State College (later North Carolina State University), Princeton, and Harvard. Their intention was to build, with government assistance, the "best planned rural community in the world." A tract of 10,000 acres was set aside, land was cleared, and homes and a community center were built. MacRae differed with Interior Secretary Harold Ickes over how Penderlea should be managed, and on 12 May 1934 the entire program was federalized under the New Deal. MacRae appealed to President Franklin D. Roosevelt without success, and a few months later he resigned as manager. First Lady Eleanor Roosevelt visited the project on 11 June 1935.

Control of Penderlea Homesteads passed from the Division of Subsistence Homesteads to the Resettlement Administration to the Farm Security Administration, each with a new set of policies and requirements. The original goal of 500 20-acre farms was never met. A total of 142 units were leased, but by the onset of World War II few of the original homesteaders remained. Liquidation followed, and by 1947 all of the farms had been sold, most to their tenants with low-interest loans. Today many homes, the large community center, and other structures associated with the project remain.