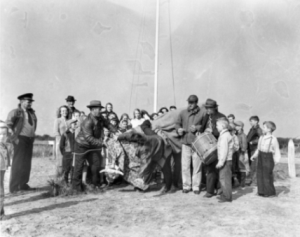 Old Christmas, or "Little Christmas," celebrated by some eighteenth- and nineteenth-century North Carolinians around 5 January each year, resulted from the adoption of the Gregorian calendar by the British Empire in 1752. Scattered parts of the American colonies refused to celebrate Christmas on the new date (25 December) and eventually merged Old Christmas into the new Epiphany (6 January), creating a joint observance not seen in the West since the fourth century. A few communities in coastal North Carolina became a minority within a minority by maintaining the distinction. In time, 25 December became the focus of religious sentiment, and Old Christmas turned secular.

In some communities, it was customary to bless fruit trees on Old Christmas or to go outdoors in the early morning hours to watch livestock kneel in remembrance of the Nativity, but dancing, feasting, exchanging gifts, and other common practices had no special Christian meaning. In Stumpy Point (Dare County) and elsewhere, girls and unmarried women sometimes set out a meal at a "dumb table" on the eve of Old Christmas, hoping to glimpse the apparitions of their future husbands hovering over the empty places. On Hatteras Island, loose bands went from house to house, often in disguise, soliciting food and drink and making raucous music. Leaders of such processions sometimes carried a pole topped with the head of a cow or steer, a mascot that evolved into Old Buck-one or more revelers in a roughly bovine costume.

I grew up in Wilmington, NC.

I grew up in Wilmington, NC. Born 1992. My grandparents were born in 1936-1942, also in coastal NC. They always talked about Old Christmas and the rule in our house was that Christmas decorations could not be taken down until after Old Christmas. Amazing our traditions can continue orally for hundreds of years!