Our Living and Our Dead 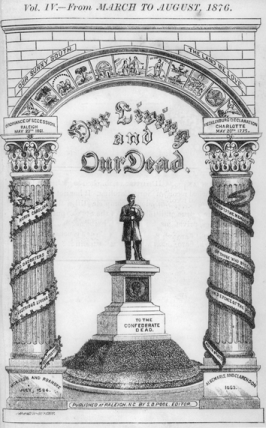 Our Living and Our Dead was a literary-historical periodical first published in New Bern on 2 July 1873. Stephen D. Pool, the editor of the weekly folio, declared that its purpose was "to make a fair and impartial record of my native State, and of her gallant sons,-of the living, maimed or able-bodied, as well as the dead, whose remains filled every cemetery, reposed beneath the sod of almost every battle-ground, or in the enclosure of every hospital and Confederate cemetery, and of every prison pen at the North." Our Living and Our Dead contained miscellaneous sketches, correspondence, state news, war diaries, war reminiscences, registers of North Carolina troops, and selected verse, as well as reprints from other southern periodicals. While most of the material in the publication focused on North Carolina's role in the Civil War, articles on other subjects also appeared. For example, the periodical published a number of articles defending the authenticity of the Mecklenburg Declaration of Independence of 20 May 1775.

In October 1873, Our Living and Our Dead became the official publication of the North Carolina Branch of the Southern Historical Society. In 1874 it was moved to Raleigh, became a single-column monthly, and continued regular publication until March 1876. Theodore B. Kingsbury and James H. Pool (the editor's brother) became associate editors. Kingsbury, a North Carolina author and literary critic, wrote many essays for the magazine and became the publication's most prolific contributor. He prepared historical and biographical sketches, as well as articles on education, southern textbooks, poetry, and plagiarism.

The circulation of Our Living and Our Dead ranged from about 1,500 to 2,000 readers. This proved to be an inadequate subscriber base, and the periodical ceased publication in March 1876. The magazine stands out as the most provincial of the South's postwar literary-historical periodicals. In addition to being a major source for the work and ideas of Kingsbury, the publication remains a resource for the history of the state, especially in relation to North Carolinians' involvement in the Civil War.

Ray M. Atchison, "Our Living and Our Dead: A Post-Bellum North Carolina Magazine of Literature and History," NCHR 40 (October 1963).