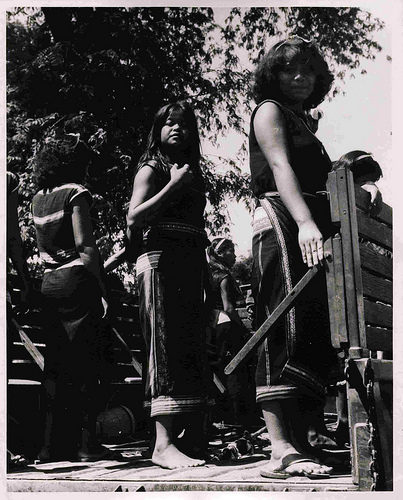 Montagnards, or Dega as they call themselves, are a tribal people of the Malayo-Polynesian and Mon Khmer language groups, some 30 tribes of which live in the central highlands of Vietnam. Between 1962 and 1972, the Montagnards' mountain domain was the scene of some of the most intense fighting in the Vietnam War, and members of the U.S. Army Special Forces (Green Berets) fighting there often bonded with the Montagnard militia, who were regarded as courageous fighters and fiercely loyal friends.

With the collapse of the South Vietnamese government in 1975, Montagnards who had cooperated with the Americans were viewed with suspicion by officials of the new Socialist Republic of Vietnam, often being subjected to persecution, imprisonment, or death. Many fled to Cambodia, where they organized a resistance to communist rule but were ultimately persecuted by the Khmer Rouge.

By 1985 Americans had become aware of the dire circumstances of the Montagnards, and arrangements were made the following year for Montagnard refugees to enter the United States. In 1992 another band of Montagnards, located in eastern Cambodia, was evacuated under threat of annihilation by the Khmer Rouge and Vietnamese. Through the efforts of Lutheran Family Services and Catholic Social Services, a majority of the approximately 3,000 Montagnard refugees now living in the United States have been successfully resettled in the North Carolina cities of Charlotte, Greensboro, and Raleigh. Although many Montagnards hold to their traditional belief in spirits associated with the forces of nature, most are now Christians. Those who remain in Southeast Asia continue to face severe persecution.

Hickey, Sons of the Mountains: Ethnohistory of the Vietnamese Central Highlands to 1954 (1982).