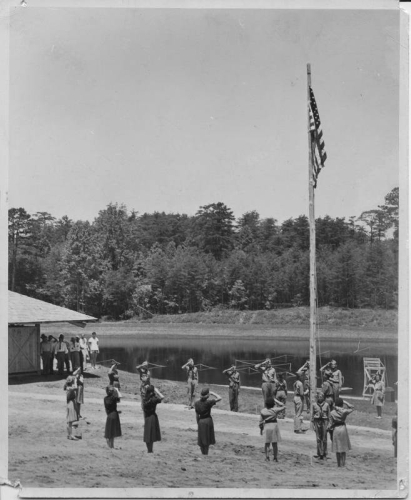 Mayo River State Park was created in May 2003 when the North Carolina General Assembly authorized the Department of Environment and Natural Resources to set aside property along the Mayo River as a new unit of the state parks system. Development of the park has occurred under the North Carolina Division of Parks and Recreation New Parks for a New Century initiative. The park's interim facilities opened to the public on April 1, 2010 and include picnic facilities, short hiking trails, and fishing in ponds.

The Mayo River, a tributary of the Dan River, begins in Virginia as two small forks that converge just south of the North Carolina state line. The river flows roughly 16 miles south to just below the town of Mayodan in Rockingham County before it joins the Dan River.

From 1948 until the early 1970s, the site was operated as a community park. The original park owner, former textile giant Washington Mills Co., commissioned internationally renowned architect Antonin Raymond, a protege of Frank Lloyd Wright, to design the park and its recreational buildings. Raymond's architectural design was intended to blend with the densely wooded surroundings. After working in Japan for a number of years on projects such as the famous Imperial Hotel, Raymond returned to the United States and opened a firm with partner Ladislav Rado. The park's massive picnic shelter, historically renovated, reflects Raymond's Japanese-style architectural influence. Unfortunately, a second park building by Raymond that served as a bathhouse for the former park had to be demolished due to deterioration. In its place stands new restroom facilities in similar architectural style.

Two hydroelectric dams and their canals are located below the Highway 220 Business bridge (today paddlers need to exit the river north of Mayodan at the Highway 220 Business bridge). These dams were originally built to generate power for two cotton mills -- Mayo Mills in Mayodan (which later became Washington Mills) and Avalon Mills. The Avalon mill structure was destroyed by fire in 1911. Abandoned mill village houses were moved to Mayodan by hitching them to horses and rolling them on logs. Both mills had been established in the 1890s by Col. Frances Fries of nearby Winston-Salem. Col. Fries and partners, including Washington Duke of the Duke tobacco empire, envisioned hydroelectric possibilities for their textile business venture due to the natural fall line of the river. They were responsible for building a railroad along the river's bank. The dams and rail line are still in use.


Several well-preserved fish weirs (fish traps) built by American Indians can be spotted while paddling the Mayo. Native settlements can be traced back thousands of years. Fragments of tobacco pipes, arrowheads and pottery have been found along the river banks and feeder streams. Historical artifacts offer evidence that there were once American Indian tribes living on this land near the river.

Later, a plantation known as Shady Grove operated on the property owned by early settler Samuel Smith and his descendents. A classical school, Shady Grove Academy, was incorporated on the site in 1825. Two grist mills were built to serve settlers on both the east and west sides of the Mayo River. Several of the Smiths are buried in a family cemetery that still exists today.