History of the North Carolina State Park System - Part 9: Planning for the Future and Growing Parks and Conservation in a Rapidly Growing State, 2000-2011 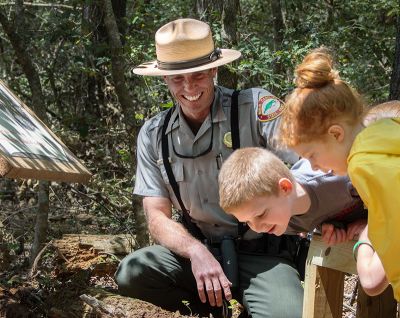 The new century began with an energizing call from outgoing Governor Jim Hunt to preserve a million acres in North Carolina over the coming decade.  Lawmakers heeded his call and enacted legislation mandating the state’s pursuit of the lofty goal.

However, over the next few years, North Carolina experienced significant budget shortfalls so spending for park expansions was severely limited.  During that time, the N.C. Division of Parks and Recreation embarked on its New Parks for a New Century initiative, which identified sites in the state - among some of the most treasured and threatened of natural resources - as potential additions to the state parks system. This list of sites is regularly updated through a formal planning process. Important examples of the state's natural diversity are examined using scientific criteria as well as by rating their suitability for recreation.

Since this process began in 2002, some sites that were once on the list have been added to the parks system as state natural areas or state parks. The Division determined that adding new units to the state parks system should focus on preserving sites of statewide significance, on ensuring that representative examples of the state's resources are protected and on providing state park services to areas of the state currently underserved.

With departmental and General Assembly support, funding was provided to implement the recommendations of a 2004 study to raise salaries of all rangers and park superintendents in the state parks system by an initial  average 6.95 percent.  The salaries were increased again in the next year.  In a related move, funding was provided to improve salaries of maintenance personnel, with increases to range from 3.2 to 9.7 percent.

For the better part of the state’s 90-year history, state park superintendents and rangers were under-compensated on several fronts when compared to professionals working elsewhere in state government.  That problem was exacerbated after park rangers formally entered into the law enforcement field in the late 1980s.  The pay disparity had prompted advocates to encourage the General Assembly to order a study by the Office of State Personnel in 2004.  The study found that rangers in North Carolina were being paid 10-14 percent less than their counterparts in other states when performing the broad duties required.

The salary adjustment alleviated an inequity in pay that had existed since at least 1988, when law enforcement certification began to be required for rangers and superintendents.  The change made it easier for the Division to recruit and retain entry-level rangers.

The study noted that it is difficult to compare the job of park rangers and superintendents with other law enforcement jobs such as police officers and deputies, or even those elsewhere within the Department of Environment and Natural Resources, such as marine fisheries and wildlife enforcement officers.  Beyond law enforcement duties, North Carolina rangers are responsible for natural resource management, environmental education and visitor services.

Also in 2004, an agreement was reached with Crescent Resources Inc., the real estate arm of Duke Energy to acquire 2,915 acres to expand Lake James State Park.  The acquisition, representing about 30 miles of shoreline, protected critical watershed and view-shed areas in Burke County, and is one component of a regional development and conservation plan fashioned by state and local governments, Crescent and land conservation trusts.  The acquisition was made possible by a negotiated bargain sale from the utility company and also made use of a creative financing instrument – certificates of participation – authorized by the 2004 General Assembly is a bond-type indebtedness that borrows against future revenues of the trust fund.

In 2006, the state parks system’s 90th Anniversary year, 5,101 acres of land were brought into conservation in partnership with the private conservation community and with support from the Parks and Recreation, Clean Water Management and Natural Heritage trust funds.

The first land acquisition of 101 acres for Sandy Run in Pender County was completed with the help of The Nature Conservancy.  The existing Beech Creek Bog State Natural Area will be combined with similar bog areas elsewhere in Avery County.

Other significant land acquisitions during the year included the largest single addition ever to New River State Park at 638 acres.  The acquisition protects 1.6 miles of river shoreline just downstream of the Wagoner Road Access.

And, 549 acres were added to Elk Knob State Park, protecting the summit area of The Peak, the highest mountain in Ashe County.

The Division made a commitment during this time to promote planning and construction practices of infrastructure and buildings that are environmentally responsible, profitable, and healthy places to live, work and enjoy.  The agency adopted a policy requiring the pursuit of LEED (Leadership in Energy and Environmental Design) certification through the U.S. Green Building Council's LEED Green Building Rating System for all new, or significantly renovated, buildings having 5,000 square feet or more.

For buildings less than 5,000 square feet, project team members are to be familiar with the use of LEED as a tool to help guide the project.  Sustainable and green buildings typically require some additional services and result in additional deliverables.  In most cases, additional costs are recovered within a few years based upon energy savings and other factors.

A major expansion of the campground at Stone Mountain State Park was completed.  And, at Hanging Rock State Park, four vacation cabins were built and six existing cabins were renovated.  Among capital projects, a new 7,500-square-foot visitor center at South Mountains State Park was dedicated in December 2006, representing an investment of $2.6 million.

In 2007, the state parks system brought 8,042 acres of land into conservation at 16 units with support from the Parks and Recreation, Clean Water Management and Natural Heritage trust funds.  A premier partnership effort involving the trust funds, the General Assembly, land conservancies and local communities resulted in the acquisition of the 996-acre, private nature attraction Chimney Rock Park to be integrated into Chimney Rock State Park now in development.  Chimney Rock Park began as a private nature attraction in 1902.  Its dominant feature is a 315-foot-tall rock spire that offers 75-mile views.  The park also has a nature center and a network of hiking trails leading to unusual geologic features and the 404-foot Hickory Nut Falls.  It has also been featured in a number of motion pictures, including Last of the Mohicans.

Improvements to the U.S. 221 Access at New River State Park, included a 14,000-square-foot visitor center, campground, picnic grounds and maintenance complex were dedicated.  The Division also focused its attention on a new observation platform at Mount Mitchell State Park and development of infrastructure at Gorges State Park.  In addition, master plans were completed for the 3,000-acre addition at Lake James State Park and for South Mountains State Park.  Master plans were authorized for Chimney Rock, Haw River and Carvers Creek state parks in 2008.

The General Assembly authorized the Deep River State Trail as a network of conservation and recreation lands along the river.  And, the Division established the Pineola Bog and Sugar Mountain Bog state natural areas with acquisitions of 91 acres and Sandy Run Savannas State Natural Area with 2,357 acres.  Lawmakers also authorized $120 million in 2007 through certificates of participation for land acquisition in the state.  The General Assembly followed up in 2008 with an additional allocation of $50 million in COPs for land acquisition through the trust funds.  It is notable that 2008 COPS indebtedness is to be repaid from the state general fund, instead of future revenue from the trust fund.

The Division’s State Trails Program initiated a corridor plan with local governments for the Mountains-to-Sea Trail in the western piedmont from Stone Mountain State Park through Guilford County and continues to fine tune corridor plans for the piedmont and eastern sections of the 1,000-mile route.  A 15.1-mile segment of the trail along the Blue Ridge Parkway was dedicated.

During this time, the Division’s resource management team stepped up efforts to protect the state parks’ natural resources, particularly in the areas of prescribed burns, invasive species and stream restoration.

Between 2000 and 2008, more than 42,000 acres were added to the North Carolina state parks system.  During the 2008 General Assembly, lawmakers authorized two new state natural areas in western North Carolina.  The authorization of the Yellow Mountain and Bear Paw state natural areas, both centered in Avery County, allowed the state parks system to begin the land acquisition process.  The Yellow Mountain State Natural Area is part of the Roan Highlands region, which boasts at least 76 rare species and an array of natural communities including grassy balds, cliffs, high elevation ridges and streams.  The Bear Paw State Natural Area is of national ecological importance and includes Hanging Rock Ridge, Four Diamond Ridge and the headwaters of Dutch Creek.  And, it contains an outstanding example of a rare high elevation, rocky summit supporting nine rare species including the federally endangered Virginia big-eared bat.

In fall 2008, Gov. Mike Easley announced that the state would acquire 2,456 acres on Grandfather Mountain to become North Carolina's newest state park.  Under an agreement with Grandfather Mountain Inc., the state parks system would acquire the undeveloped portion of the famous tourist destination, as well as an easement on 749 acres to be retained by the heirs of the late Hugh Morton, at a price of $12 million, well below its appraised value.  Upon passage by unanimous vote early in the 2009 Session of the North Carolina General Assembly, Gov. Beverly Perdue signed the authorization bill establishing Grandfather Mountain State Park.  Aside from being one of the state’s signature landmarks, Grandfather Mountain is a premier natural resource, boasting 16 distinct ecological communities and 73 rare species and had been the only privately held property recognized as an International Biosphere Reserve.

As North Carolina’s state park system nears the centennial mark, it has realized the emergence of new approaches to conservation, as well as new programs, partnerships and new standard of professionalism.  And, visitors are discovering new ways to use the parks as the state faces rapid urbanization.  Yet still, it enjoys long held, bedrock traditions such as citizen involvement in the development of state parks and deeply held sense of responsibility for stewardship for the state’s natural heritage.

I as well believe so,