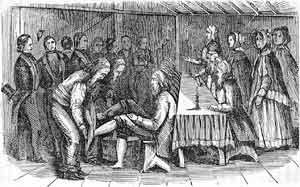 Love feasts, or "agape meals," are simple communal meals and services that are intended to promote fellowship, brotherhood, unity, and Christian love among participants. Love feasts originated in the first century among early Christians and are similar to the more widely known Lord's Supper, or Eucharist. The ceremony utilizes the love feast as a memorial of the death of Christ and may include foot washing-one church member washing the feet of another, as a sign of Jesus's humility and servitude-singing, and informal speaking or preaching.

The love feast as a service did not achieve prominence until the late 1600s, when it was adopted by German and Czech Pietists. Through them it spread to Mennonites, the Church of the Brethren, and Moravians, who continue to make it part of their worship. Other denominations, including Roman Catholics, Pentecostals, Seventh Day Adventists, and some Southern Baptists, have a form of love feast in their rites, with a heavy emphasis upon foot washing.

J. Taylor and Kenneth G. Hamilton, History of the Moravian Church in America (1967).