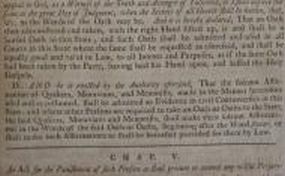 Mennonites are a Protestant group whose origins can be traced to Zürich, Switzerland, during the Reformation. Their name is taken from Menno Simons, one of their early leaders. Mennonites suffered religious persecution from both Roman Catholic and Protestant church authorities in Europe, and, as a result, many immigrated to North America starting in the 1600s. At the end of the twentieth century there were approximately 100,000 Mennonites in the United States, with the greatest numbers being in Pennsylvania, Ohio, and Indiana. The Mennonite population in North Carolina has always been small.

The early history of Mennonites in North Carolina has never been comprehensively studied, but evidence suggests that scattered groups were present in the state by the late eighteenth century. Their presence can be inferred from the Records of the Moravians in North Carolina, which contain numerous references to Mennonites and other Anabaptist groups (which advocate adult, not infant, baptism). Often these references are in relation to legislation in the colonial Assembly concerning church groups and military service. It appears that the early Mennonites never established a congregation and lost contact with other North American Mennonite groups by the early 1800s.

A 1777 law gave Mennonites, Moravians, and  Quakers the right to state 'solemn Affirmations' when 'other Persons are required to take an Oath or Oaths to the State.' " Available courtesy the State Libray of North Carolina. Available online from North Carolina History Project: http://www.northcarolinahistory.org/commentary/161/entry (accessed May 14, 2012).