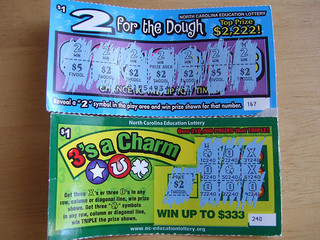 Lotteries enjoyed widespread favor in colonial America and the early United States, including North Carolina. Before they were sanctioned by public authority, lotteries prevailed in the form of private raffles, also a popular mode of raising money in England. North Carolinians raffled horses, shoe buckles, and land, but the practice in all of the colonies eventually met opposition by the English authorities, who felt that such activities ought to be approved by the government to prevent fraud. The North Carolina Assembly authorized only two lotteries before the Revolution.

Once freed from the dominion of Great Britain, the new states and the national government frequently resorted to lotteries, including the Continental Congress to obtain money to prosecute the Revolution. Although in 1780 North Carolina banned private lotteries except for those intended to support schools, many individuals continued the practice on their own initiative. The General Assembly authorized at least three lotteries during the 1780s. The advent of the new nation in 1789 witnessed a heightened appreciation of lotteries throughout the United States.

Lotteries were used to fund educational institutions, internal improvements, religious bodies, fraternal societies, private projects, and enterprises of local and county government. The average sum of money that North Carolina lotteries intended to raise was $5,555, though an obvious trend after 1814 pointed to fewer but more remunerative drawings. However, with so many lotteries both in and beyond the state pursuing so little available cash, drawings were often delayed or never held.

The popularity of lotteries in North Carolina began to wane after 1815. Some opposition was in reaction to the frauds that seemed to inhere in lotteries, reflecting a similar aversion nationwide. Reinforcing that sentiment was an antipathy to gambling and its ill consequences, spurred in part by the evangelicals of the revival movement in the early nineteenth century. The antilottery forces gradually gained ascendance. In 1827-28 the General Assembly forbade the sale in North Carolina of lottery tickets authorized by another state. And effective 1 Apr. 1835, the legislature banned all lotteries, public and private, in the state.

In 2000 the election of Michael Easley as governor set off another lottery controversy. The first governor to endorse a lottery in recent history, Easley had made a state lottery one of the pillars of his campaign; once in office, he hoped to have one in place by 2002. The slowing economy had diminished the state's finances, and Easley wanted a lottery to fund improvements in education, such as reducing class sizes in public schools and instituting a prekindergarten program for at-risk children. A bill introduced in the General Assembly calling for a binding referendum of the voters generated a fierce debate over whether a lottery was in the best interest of the state; the bill was defeated in the referendum in September 2002. Supporters of the referendum, including the North Carolina Association of Educators, anticipated the extra education funding; they pointed out that the money North Carolinians spent on games in neighboring Virginia and Georgia could then be kept in the state. The bill's major opponent was a coalition of liberals and conservatives called Citizens United against the Lottery. Among other concerns, the group contended that the lottery would prey on the poor with promises of quick wealth, erode the work ethic, and wrongly put government in the gambling business. Despite these arguments, a state lottery was established by the North Carolina legislature in August 2005, ending years of speculation and controversy if not political debate.