I met Kenny Davis during the recent commemoration of the 100th anniversary of the Wilmington race riot of 1898. A century ago, on Nov. 10, 1898, a white mob massacred many blacks and seized the city government. This year, led by a citizens' group called the 1898 Centennial Foundation, Wilmington remembered this tragic moment in its past with a host of community, school and church events.

At first, Davis doubted that blacks and whites could ever agree on how to mark this racial atrocity, one that still haunts Wilmington. Many white leaders felt threatened by his fierce convictions. But working with the 1898 Centennial Foundation changed him and many others, of both races.

"For the first time in their lives, " Davis told me, "black and white people began to come into one another's homes and talk, and look beyond race into what's in your heart."

Davis has had some close calls. He was in combat in Vietnam in 1965-67, and, when he was a policeman in Philadelphia, he was shot and nearly killed in the line of duty. Today, he devotes himself passionately to the 1898 Centennial Foundation, while also working at a fiber optics plant and, with his wife Debra, raising two beautiful children.

At his home in Wilmington, Davis and I talked about the roots of racial prejudice. Inevitably, the conversation turned to his Army years, when black GIs who had never seen free elections in the South were sent to fight for democracy in Vietnam. 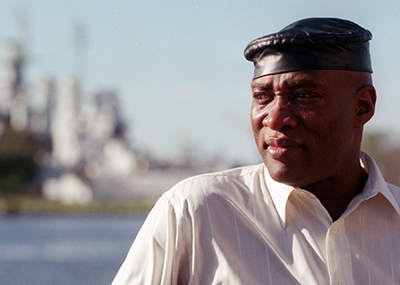 David Cecelski is an historian at the Southern Oral History Program at the University of North Carolina at Chapel Hill.

Seward, Chris. "Kenny Davis."  Photograph. 1998. To request permission for further use or to purchase a print, please contact the News & Observer.