Heidi the Cross-Eyed Opossum is a North Carolina-born female opossum who found fame in a German zoo and became a short-lived Internet celebrity in 2011.  She first appeared in a photo spread on new zoo animals appearing in the Leipzig Zoo's then-upcoming "Gondwanaland" exhibit in the German tabloid Bild in mid-December of 2010. Her unusual, cross-eyed appearance was deemed cute, and attracted immediate attention.  A German novelty song ("Opossum Heidi schielt - Das schielende Opossum") about her appeared on YouTube on December 19, 2010, and by January of 2012, a stuffed toy version by German toy maker Kösen was planned, and her Facebook page had some 285,000 fans, more than German chancellor Merkel.

Her celebrity was similar to other popular German zoo animals such as Paul the Octopus (2008-2010), who "predicted" soccer match winners, and Knut the polar bear (2006-2011). Following in Paul's footsteps, on February 27, 2011, she appeared in pre-taped segments on the late night television show Jimmy Kimmel Live!, where she successfully "predicted" two of three Oscar awards. She indicated Natalie Portman would win best actress and Colin Firth for best actor by placing her paw on an Oscar statuette with the actor's photo.  Heidi incorrectly predicted the film 127 Hours would win best picture.

In March, an official game for iPhone and iPad, called Heidi's Workout was released. The title referred to Heidi's obesity and the fact that the zoo had put her on a diet.  The unusual appearance of her eyes was due to obesity, a not uncommon problem for captive or pet opossums. Strabismus, or improperly aligned eyes, can be caused in opossums by a build-up of fat deposits pushing on the eyes. The condition is not painful, and the opossum can function normally.

All this fame came before Heidi was even on display. On June 9, Heidi was introduced to her new habitat and on July 1 the Gondwanaland exhibit was opened to crowds who flocked to see her. Heidi's humble beginnings date back to 2008 in Asheboro, where an unknown Samaritan turned her into the North Carolina Zoo. She was likely orphaned after her mother was struck by a car, a common fate for the slow-moving, nocturnal marsupials. She was cared for at the Valerie H. Schindler Wildlife Rehabilitation Center at the zoo for a year, but never put on display. Nine opossums from the center, including Heidi and her sister, Naira, were given to the Copenhagen Zoo in Denmark in 2009. Heidi and several of the other opossums then went to the Odense Zoo. Finally, in May of 2010, Heidi, Naira, and an unrelated male opossum named Teddy went to the Leipzig Zoo in Germany.

On September 28, 2011, the Leipzig Zoo euthanized Heidi to spare her pain and suffering from chronic arthritis and other age-related health problems. 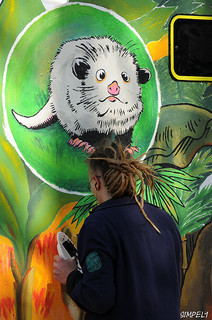