On November 18, 1879, the North Carolina Colored Industrial Association Fair opened in Raleigh at the site of what had been a military hospital. Thousands of African Americans flocked to the state capital to participate for the first time in an event that would display to all the extent to which they had established themselves in the world of free people. Held about a mile outside Raleigh, the fair featured a speech by Governor Thomas J. Jarvis, who was conveyed to the fairground in a parade of decorated carriages and African American military units. The four main buildings at the fair were devoted to handicrafts, agriculture, machinery, and art. Displays of tobacco, wine, corn, hams, and pumpkins vied with exhibits of wagons, plows, harnesses and even coffins. Many of the handicrafts, especially the spreads and baby hoods, would, in one reporter's opinion, "hold their own in any Northern fair I have ever attended." Amusements such as a Punch and Judy show and an "electric machine" were much admired and, in the case of the latter, a bit feared. Horse races and a walking race provided entertainment. 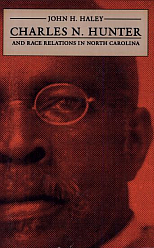 The fair was the brainchild of Charles Norfleet Hunter. Born into slavery in Raleigh in the late 1850s, Hunter became a journalist and educator after the Civil War and was a voice of the African American community in North Carolina. He believed that African Americans in North Carolina and throughout the South had made great progress since emancipation and had much in which to take pride. He also believed that the progress of the race depended and would continue to depend on the goodwill and kindness of whites. The Colored Industrial Association Fair embodied these beliefs. It was a showcase of African American achievement, but Hunter emphasized to reporters the importance of the support of prominent white people in bringing the fair about. In the end, however, it was race pride that made the fair an important part of North Carolina's Black community for nearly fifty years.