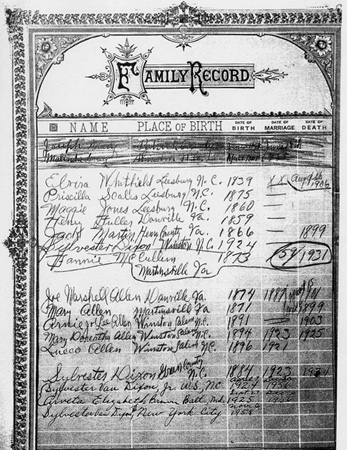 Genealogy, the study of family origins and descent, has interested North Carolinians for centuries. Colonial printer James Davis of New Bern printed genealogical information regarding his family, and in the nineteenth century, the historical publications of John H. Wheeler and Samuel A. Ashe contained a great deal of genealogical information. J. R. B. Hathaway of Edenton published the North Carolina Historical and Genealogical Register for several years around the beginning of the twentieth century. Several national lineage societies have created chapters in North Carolina, with an emphasis on researching and proving family lines as a basis for membership. These societies have helped raise interest in genealogy even further.

In the early twentieth century, North Carolina secretary of state J. Bryan Grimes published An Abstract of North Carolina Wills (1910) and North Carolina Wills and Inventories (1912). In 1968 Frederick A. Olds compiled another abstract that supplemented Grimes's works. The twentieth century saw an explosive growth in the genealogical field as more people realized the importance of family research. The building of a new North Carolina Archives helped to provide better facilities for researchers and genealogists. Manuscript departments at many of the universities and colleges in North Carolina also contain a wealth of genealogical information, and public libraries have expanded their holdings as more genealogical materials have become available. The availability of computers, CD-ROMS, published indexes, the Internet, e-mail, and other recent technological developments have all contributed to the growth of interest in genealogy by making resources more readily available to researchers. The North Carolina Genealogical Society, founded in 1974, and local societies are also important resources for genealogists.

Family record sheet, likely from a family Bible, from the collections of the North Carolina State Archives and State Library of North Carolina.