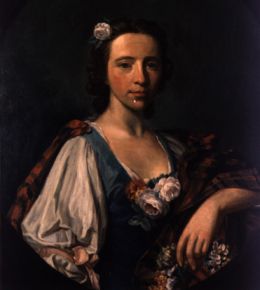 The exact location of the home in which Scottish Jacobite heroine and American Loyalist Flora MacDonald lived during her stay in North Carolina has, for decades, been the subject of much debate. With her husband Allan, MacDonald emigrated to North Carolina in 1774 and settled on a plantation purchased from Caleb Touchstone in present-day Montgomery County, not far from where Flora's stepfather, Hugh MacDonald of Armadale, had settled only two years before. The controversy regarding the actual site of the MacDonald homestead has centered on two tracts of land that were owned by Touchstone. One tract was located on Mountain Creek in upper Richmond County and the other on Cheek's Creek in Montgomery County. The two sites are only about five miles apart near the Richmond-Montgomery county border. Historians James Banks and J. P. MacLean reported that the MacDonalds purchased a tract of land on Mountain Creek and named it Killiegray. The site of the Killiegray plantation on Mountain Creek was believed by many to be the site of the MacDonald home; however, the name Killiegray is that of a small island in the Sound of Harris in the lands of the Clan MacLeod in the Scottish Hebrides. The MacDonalds would not have named their plantation after a MacLeod holding with which they had no connection.

Moore County historian and surveyor Rassie Wicker did extensive research on the two tracts of land in question and proved conclusively that the Cheek's Creek tract was the tract that was purchased by Allan MacDonald of Kingsburgh. Wicker's surveys were further supported by the discovery of a document in the Public Record Office in London by Donald MacKinnon. In the July 1775 document, Governor Josiah Martin stated that he was going to deposit some important papers, "with my friend Mr. McDonald of Kingsborough, living upon Cheek's Creek in Anson County." Investigations of the site that were performed in 1952 and 1953 proved that the Cheek's Creek tract was the one owned by the MacDonalds during their brief stay in North Carolina. Later archaeological explorations have shown that there is evidence on the Cheek's Creek site that supports the descriptions made by Allan MacDonald of Kingsburgh in his Loyalist Claims.

The Mountain Creek tract was owned by a Stephen Touchstone in 1756 and was occupied by an Isaac Armstrong from 1772 until 1823. In 1824 the land was passed to a Norman MacLeod and probably received the name "Killiegray" at this time due to the fact that the actual Killiegray in Scotland is located in traditional MacLeod lands. There is no record of that tract being known as "Killiegray" prior to that time, nor is there any evidence of MacDonald connections with the property.

One of the most interesting facets of the stories surrounding the MacDonald residence is that of the mysterious deceased children, whose remains were found at the Killiegray site in 1937. The bodies, who some argued were the children of Flora and Allan MacDonald, were removed from the site and reinterred at Flora MacDonald College in Red Springs. Historians have since disproved the insistent oral tradition regarding the deceased children, especially since Flora was well past her childbearing years when she emigrated to North Carolina and there is no record of any additional children who are not previously accounted for. Nonetheless, these two unknown children still lie in a shrine to Flora MacDonald. The shrine contains MacDonald's original grave marker, erected at Kilmuir cemetery in Skye in 1871 and blown down and broken by a gale in 1873, which was obtained by Charles Vardell, president of Flora MacDonald College in Red Springs, and reassembled at the institution when its name was changed to honor MacDonald in 1922.

I am preparing an illustrated

I am preparing an illustrated talk on the Life of Flora mcDonald (sic), that is how she wrote her name, to a local History Society, here in North East England. Is it possible to supply me with a map showing the locations of the plantations of Flora and her relatives

Thank you for your comment and for visiting NCpedia! You've asked an excellent question. I am forwarding your inquiry over to our library's Reference Team at slnc.reference@ncdcr.gov so that they can assist you further. A member of our staff will be reaching out to you via e-mail shortly.

The mystery children held at

Do you still have this

Do you still have this information? The link no longer works. Thanks.

I am so sorry that I did not

I am so sorry that I did not receive your message til now . Yes ,by all means send it by email if you choose .I have seen most all of her portraits ,some good ,and some beautiful
Thank you ,
Nolan

I am an artist who lives in

I am an artist who lives in Bristol England. Many years ago my grandmother gave me an old oil painting of a woman. Recently and previously unknown, I found a small envelope hidden at the back between the frame and the painting showing the reply to an enquiry my grandmother made in 1953 to some (presumed) expert (postmarked London; although who this expert was remains unknown, simply writing H.G.G.J.).
In the letter he/she describes the painting as being done by Frank Stone, an British Associate Royal Academician who died in 1859. The interesting part is that he attributes the portrait to be of Flora Macdonald, although he says this has not been traced amoungst his exhibits. The painting has been in the family for year so I doubt if any photo exists in the public domain. She certainly looks more "sentimental" than the portrait on your site (typical of the work I've noticed online). I just "Googled" your site to make this point of interest with no intellectual or material knowledge of the woman. Sadly, the painting, although rather fine, requires restoration.

Will you send a copy to me ?. My 3xgrt Grandfather, Kenneth Black, povided her and her family plantations in Cumberland Co(now Moore Co,NC) and I am collecting copies all paintings of her .These homes provided her safety otherwise she would not have in America.

Thanking you in advance

Thanks to your 3x for taking

Thanks to your 3x for taking care of my 5x G.Grandparents!

Dear Nolan I have a portrait

Dear Nolan I have a portrait oil painting that I believe depicts Flora MacDonalds. I would like to send it to you for an opinion. Thanks
Regards

Just a photo copy by email

Just a photo copy by email will be sufficient
Thank you