The flag used in colonial North Carolina was the banner of the settlers' mother country, England. In 1777, after the Revolutionary War and American independence, the British flag was replaced by one representing the United States and consisting of 13 red and white stripes and 13 white stars on a field of blue. North Carolina had no official state flag until the constitutional convention of 1861 took up the subject in connection with the movement to secede from the Union. John D. Whitford, a delegate from Craven County, introduced a resolution to create a flag for the state that "shall be a blue field with a white V thereon, and a star, encircling which shall be the words, 'Surgit astrum, May 20, 1775.'" 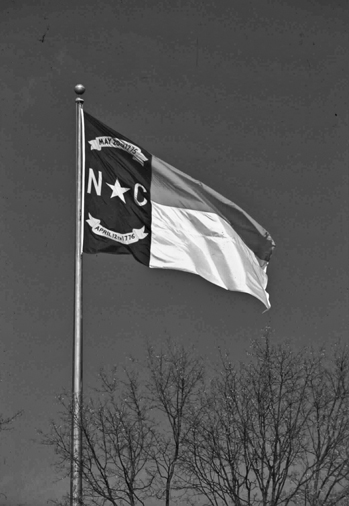 Convention delegates created a committee that offered a flag different from that envisioned by Whitford, one probably designed with the aid of William Garl Browne, an artist and resident of Raleigh. The committee's ordinance, adopted by the convention, directed that "the Flag of North Carolina shall consist of a red field with a white star in centre, and with the inscription, above the star, in a semi-circular form, of 'May 20th, 1775,' and below the star, in a semi-circular form, of 'May 20th, 1861.'" There were also to be "two bars of equal width, and the length of the field shall be equal to the bar, the width of the field being equal to both bars; the first bar shall be blue, and the second shall be white, and the length of the flag shall be one-third more than its width." The 1775 date was the traditional date of the so-called Mecklenburg Declaration of Independence, while 20 May 1861 was the date of North Carolina's secession from the Union. The two May 20th dates symbolized North Carolina's breaking the ties with undesirable governments.

The ordinance establishing the new state flag was ratified on 22 June 1861, and the flag flew over North Carolina until 1885. During the Civil War, the U.S. flag was replaced by the "Bonnie Blue Flag" of the Confederate States of America, which consisted of a blue field with a single white star at its center. North Carolinians recognized this as their national flag, although in some areas other designs of Confederate flags-such as one with a white field, a red canton, and a blue Saint Andrew's cross with white stars-were flown. The familiar Stars and Stripes returned as the national flag when North Carolina was readmitted to the Union in 1868.

In 1885 a new model for the North Carolina state flag was adopted by the legislature, and this version has flown unchanged over the state since that year. The flag features a blue union containing a white star in the center with a gilt N on the left and a gilt C on the right, the letters' height measuring about one-third the width of the union. The 1885 legislature directed that "the fly of the flag shall consist of two equally proportioned bars; the upper bar to be red, the lower to be white." As to proportions, it directed that "the length of the bars horizontally shall be equal to the perpendicular length of the union, and the total length of the flag shall be one-third more than its width." Above the star in the center of the union is a gilt scroll in semicircular form with the date "May 20th, 1775," and below the star is a similar scroll with the date "April 12th, 1776." The latter date replaced the secession date and commemorates the Halifax Resolves, which represented the first official statement by an American colony calling for a united declaration of independence from British rule.

Devereaux D. Cannon Jr., The Flags of the Confederacy: An Illustrated History (1988).