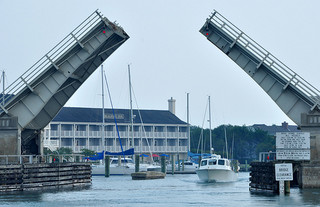 Drawbridges were built in North Carolina prior to the American Revolution for the purpose of crossing large rivers. At that time, ferries enabled colonial travelers and tourists to traverse deep water instead of traveling many miles inland looking for a shallow ford, and a floating bridge or barge-which could be swung aside to allow the passage of ships to plantations above-could be used on narrow streams. Larger rivers, though, presented a greater problem.

The state's first drawbridge was built by Benjamin Herron across the Cape Fear River at Wilmington. In 1774 a second bridge was constructed across the Cashie River at Windsor in Bertie County. Drawbridges of that era were typically made of cypress timber, with the drawing mechanism consisting of "3 large iron hinges on each side"; the bridge was opened by "four iron chains and weights with iron sheaves and rollers at the heads of the posts." A few modern navigable waterways in North Carolina, notably the Intracoastal Waterway, are spanned at some point by a drawbridge.