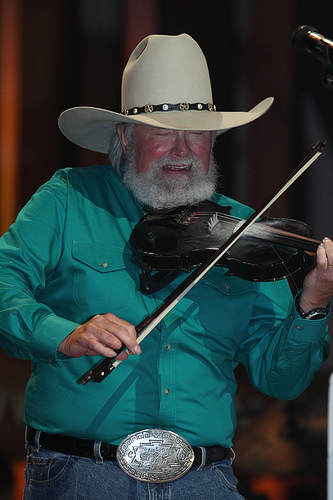 Charlie Daniels is a bandleader, fiddler, guitarist, singer, and songwriter best known for heading his country rock group, the Charlie Daniels Band. He was born Charles Edward Daniels on October 28, 1936, at the James Walker Memorial Hospital in Wilmington, North Carolina, the only child of William Carlton and LaRue Hammonds Daniels. His family initially raised tobacco, but then moved repeatedly as his father searched for work. As a result, Daniels lived in a number of towns as a child, including Elizabethtown, N. C., Valdosta and Baxley, Ga.; and Spartanburg, S. C. Many of his early years were spent in Wilmington; he lived most of his teen years in the Goldston/Gulf area. After he graduated from Goldston High School in 1955, he moved briefly to Sanford, working as a laborer for an electronics company.

Daniels' early musical life was dominated by hymn singing and listening to country music from the Grand Ole Opry (especially Roy Acuff). He studied the guitar, mandolin, banjo, and fiddle in turn, despite cutting off part of his right ring finger in high school. Around 1953 he and some friends formed a bluegrass band named the Misty Mountain Boys in homage to Lester Flatt and Earl Scruggs' Foggy Mountain Boys. While the band broke up when his family moved back to Wilmington, Daniels soon found work singing and playing the guitar in clubs in Jacksonville, N. C.; here his musical style moved towards rock 'n' roll. Eventually he formed a rock 'n' roll band called the Jaguars (active 1959–1967), which later added jazz and pop standards such as "Mack the Knife" to its repertoire. Daniels also wrote songs, most notably "It Hurts Me," which Elvis Presley recorded in 1964. In 1963, Daniels married his wife Hazel of Tulsa, Oklahoma; their son, Charles William was born in 1965. By 1967, Daniels had moved to Nashville, working as a session player. He participated in Flatt & Scruggs's Nashville Airplane album (1968); Bob Dylan's albums Nashville Skyline (1969), New Morning (1970), and Self Portrait (1970); and Ringo Star's Beaucoups of Blues album (1970). He was also a producer for the folk-rock band The Youngbloods (1969–1970).

In 1970, Daniels formed the first incarnation of the Charlie Daniels band, which recorded its first (self-titled) album in 1971. By their third album, 1973's Honey in Rock, they had a hit single with "Uneasy Rider," a humorous bluegrass song about a hippie who must enter and escape from a redneck bar. The following year the band achieved national success with their platinum album Fire on the Mountain. In the following years, the band toured incessantly and produced an album at least every other year. Along the way, they also helped to promote Jimmy Carter's 1976 presidential campaign.

The Charlie Daniels Band's defining success occurred with the triple platinum album Million Mile Reflections, which was the number one country album for 1979. The album contained Daniels' greatest hit, the platinum single "The Devil Went Down to Georgia" (number one on the country charts, number three on the pop charts). The song won a Grammy and was featured in the popular 1980 film Urban Cowboy. Charlie Daniels received the Musician of the Year Award from the County Music Awards in 1979, and the band was honored as the Touring Band of the Year by the Academy of Country Music in both 1979 and 1980.

The Charlie Daniels Band followed Million Mile Reflections with another platinum album, Full Moon (1980), a peak that the band did not reach again until Simple Man (1989), the number two country album of that year. In the 1990s, the band turned to Christian music with The Door (1994) and Steel Witness (1996); they would record more gospel music over the next decade, including A Carolina Christmas Carol (2003). Most of Daniels' later output is published by his own company, Blue Hat Records, which he founded in 1997. Throughout this period, the band continued to tour and record; in 2005–2006, they visited US military bases overseas.

Musically, Charlie Daniels tends to resist categorization of his music, simply calling it "CDB music." His own background in bluegrass, country, rock, and jazz performance suggests something of his musical range. His music blurs the boundaries of country, rock, and bluegrass, and has strong ties to country rock and southern rock. In a 2000 interview, Daniels describes his early albums ambiguously: "We were doing stuff that probably could have been called country music today, but would certainly have not have fit in at that time. So, it would be more of a rock-type thing." The song "The South's Gonna Do It Again" refers affectionately to Lynyrd Skynyrd and other southern rock bands, and Million Mile Reflections was dedicated to the memory of Ronnie van Zant. Daniels also founded the Volunteer Jam concerts, which have occurred regularly since the 1970s and typically feature country and southern rock artists.

Charlie Daniels' music has been the cause of social outcry on several occasions. His 1989 single "Simple Man" shocked some listeners for its proposal that drug dealers should be lynched and that child abusers should be fed to alligators. Daniels had to state publicly that "Obviously I'm being facetious with the song." Daniels was less apologetic for his patriotic song "This Ain't No Rag, It's a Flag," which he issued in response to the September 11, 2001, attacks. While some listeners complained that the song was offensive to Muslims, Daniels has maintained that the song refers specifically to Al Qaeda terrorists and to no others.

Charlie Daniels has been honored repeatedly by a variety of organizations. In 1996, he received an honorary doctorate from the University of North Carolina at Wilmington. The City of Wilmington has included him in its Walk of Fame. In 1997 the Academy of Country Music honored him with a Pioneer Award. In 1999 the Nashville Network declared him a Living Legend, and he was inducted into the North Carolina Music Hall of Fame. From 2001 to 2011 he had his own museum in Nashville, and in 2005, he played at Super Bowl 39 with Lynyrd Skynyrd. In 2008, he became a regular member of the Grand Ole Opry; in 2011 the Opry hosted his 75th birthday party.

Charlie Daniels passed away on July 6, 2020 at the Summit Medical Center in Hermitage, Tennessee at the age of 83.