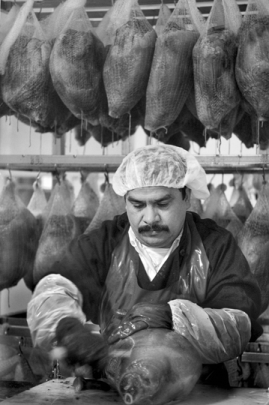 Country ham—cured for around 40 days with salt, a pinch of saltpeter, and individual spices; aged at least 25 days; and often smoked—was a popular export of North Carolina to England during colonial times as well as a versatile delicacy that came to define and enhance important family gatherings and holidays. Today, many North Carolinians strongly identify country ham with idyllic memories of home and family and an ancestry rooted in an agricultural existence. In North Carolina and other southern states, the easily preserved meat is eaten in various forms, whether as the main dish at dinner or for leftover snacking. Ham biscuits, ham and eggs, ham with red eye gravy, ham and grits, ham-seasoned vegetables, and ham bits sprinkled over a salad, for example, have been commonplace for decades.

Country ham differs from modern "city" ham-which is soaked in brine for tenderness-in the depth and strength of its salty flavor and its dry texture. Since World War II, the popularity of country hams has waned as the meat has been replaced by a variety of easy-to-prepare store-bought hams. The country hams of Smithfield, N.C., and Smithfield, Va., however, have traditionally vied for the title of best ham in the region. The Ham and Yam Festival in Smithfield, N.C., began in 1986 as a contest between these hams, but after the North Carolina hams took first place eight years in a row, the competition (although not the festival) was discontinued.

Country hams may still be purchased at most North Carolina grocery stores, although better selection is available through a variety of mail-order and Internet merchants. Johnston County Hams of Smithfield is one of the leading producers of country hams in the state. Phillips Brothers Country Ham, Inc., of Asheboro is a family-owned business dating to 1947. One of the state's largest pork retailers, the company was awarded the National Country Ham Association's grand champion award in 2004.