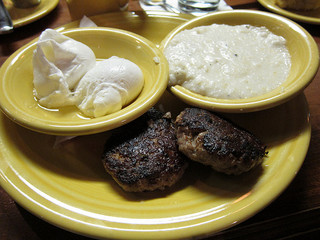 Grits, a staple in North Carolina homes and restaurants, are a simple, nutritious dish made from the rougher bits of grain and husk left over after the miller grinds corn for meal. Grits have generally been underappreciated, at times even ridiculed, outside the South. Grits are not hominy, though many dictionaries describe grits as "coarse hominy." Well-prepared grits are a flavorful addition to ham and eggs, while poorly prepared grits usually sit in the bowl and turn into a glue-like substance.

Early North Carolina cooks liked grits because they were wholesome and easy to prepare. After an overnight soaking in salted water, the grits were put on the stove top for a slow boil. Frequent stirring was necessary to avoid lumps, but within 20 minutes the chef had produced a pleasing pot of grits. The dish was set at the back of the stove to remain warm and, if necessary, a little more water was added just before serving. Often day-old grits were fried, drizzled with maple syrup, and recycled as another breakfast dish. Grits were a good energy food that prepared the farmer for a hard day in the fields.

Grits remain a ubiquitous side dish in North Carolina kitchens and restaurants and have even become commonplace in meals other than breakfast. North Carolina chef Bill Neal was a pioneer in the creative use of grits, and variations on his famed shrimp and grits recipe, first published in Bill Neal's Southern Cooking in 1985, continue to be popular.