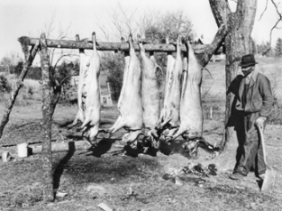 Hog killing in rural North Carolina was traditionally initiated on the first autumn or winter day after the weather had turned frigid. Neighbors often shared in the labor, when perhaps as many as 100 hogs had been penned up and fattened on peas, potatoes, or corn gleaned from harvested fields or on mast from the woods. Workers gathered from the neighborhood well before dawn. Large stones were heated in a big, open fire and dropped into barrels to heat water. The hogs were killed with large knives and then bled, scalded, hung on a gambrel, and scraped to remove the hair. They cooled overnight and generally were cut up the next day and salted. The meat was packed in bulk-with hams, sides, shoulders, jaws, and heads separated-on a tight, slightly tilted platform a foot or more from the ground or floor of the smokehouse. Troughs under the lower side caught the dripping brine, which was afterward evaporated and the salt saved for stock.

In the weeks after the hog killing, people enjoyed a variety of pork products, including spare ribs, liver, and sausage. Hams were ready for eating later, a month or two after proper curing.