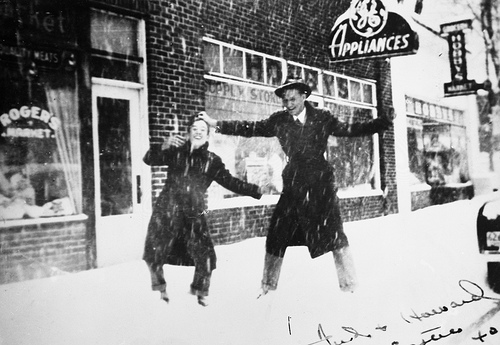 Winter storms are commonly associated with snow, ice and freezing rain. Memorable ones usually involve a mixture of all three. Simple snowstorms are most frequent in the mountains, and several are expected each year, with snow lying for several days in the valleys, several weeks on the peaks. But snow can occur anywhere. One memorable event was the storm of 22-24 December, 1989, which left more than 15 inches of snow on the ground on Christmas Day in Wilmington, and left parts of the Outer Banks with drifts several feet deep. This was the greatest snowfall on record in Wilmington, the 12 inches in February, 1973 being the only other time that values exceeded 10 inches there in the 20th century. Even in the higher parts of the Piedmont amounts over 10 inches occur only once every few years or so. In most cases, storms which produce this amount of snow are highly disruptive for travel, and cause many closings of businesses. But rarely are they more than a nuisance, while many people see them as an opportunity to enjoy winter to the full.

But when ice rather than, or in conjunction with, snow, is involved, the story is very different. Most encounters with ice come early on a winter morning when overnight cooling causes freezing conditions which turn what would have been a light dew into a sheet of ice - with the increased cooling likely on bridges making them the most susceptible sites. But the true ice storms are the real problem. These involve freezing rain. The temperature at which rain lands on the surface depends on the atmospheric temperatures above the surface. Most of the time the atmosphere is above freezing and it simply rains. Sometimes it is much colder and snow develops. Occasionally it is in between and freezing rain occurs. Then a raindrop falling through a cold atmosphere is cooled below the freezing point but is still liquid when it arrives at the ground. As soon as this super-cooled rain drop hits an obstacle, be that a tree limb, a power line, or the ground surface, it will freeze. So ice can rapidly accumulate on the obstacle, bending or breaking limbs and lines and coating the surface with ice. To get the freezing rain, the atmospheric temperatures have to be just right (or just wrong). A bit warmer and rain falls, a bit colder and its snow. Usually in any ice storm all three occur. The events of December 4, 2002 were a fine example.

For a couple of days prior to the event cold, Arctic air sat over the state. Then, late on December 4th , warmer, moist air streamed in from the west, rode up over the cold air and created the precipitation. The type of precipitation was arranged in a series of bands oriented more or less parallel to the mountains (Figures 12a & 12b). The mountains and western Piedmont had snow. Moving southeastward, the amount of freezing rain increased, reaching a maximum just north of the line between Charlotte and Raleigh. Farther southeast rain became the main feature. As the whole weather system evolved and moved eastward, one precipitation type often replaced another. For most of the Piedmont, for example, the initial snow gave way to freezing rain. This allowed great ice accumulations on wires and limbs, and the weight brought many crashing down. The result, typical of an ice storm in modern times, was difficulty of movement over roads, much damage, especially roof damage, to individual properties and a lack of electricity. In this case well over one million customers were affected, some being without power for over a week.

A similar event occurred during January 25-27, 2004. A blast of bitter cold air from the north spread over most of the central part of the state. Meanwhile, warmer, humid air from the southwest overode it, producing a mixture of snow, sleet, and freezing rain. In many areas of the Piedmont and western foothills it covered roads with several inches of glaze, resulting in numerous accidents and at least seven fatalities. The low-level cold air could not rise and escape westward over the mountains, a phenomenon called  "cold air damming".  This meant that the ice and sub-freezing temperatures persisted for several days, causing dozens of school systems to close for three days.

Resources on winter storms in libraries [via WorldCat]