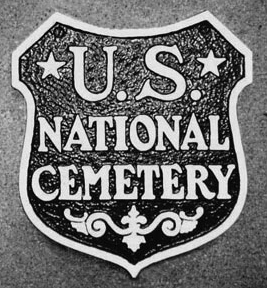 North Carolina's four national cemeteries are located in New Bern, Raleigh, Salisbury, and Wilmington. From the end of the Civil War until the First World War, these cemeteries were often referred to as "Yankee cemeteries" and ignored by the majority of the local residents, who continued to memorialize their Confederate dead. The cemeteries were frequented by local Grand Army of the Republic members on Decoration Day (Memorial Day) and at other times of patriotic celebration.

Prior to the Civil War, the U.S. government buried its military dead in a designated corner of the garrison at which the death occurred. Soldiers who died far away from their home post were buried near the place of death, often on the side of a lonely road or trail. Sailors were buried at sea. They all, however, received proper military burials. The large number of casualties that occurred during the Civil War focused public attention on providing a decent burial for those who gave their lives in defense of the Union. Therefore, on 17 July 1862, the 37th Congress of the United States passed the Omnibus Act that established the National Cemetery System. Section 18 of the act provided "that the President of the United States shall have power, whenever in his opinion it is expedient, to purchase cemetery grounds and cause them to be securely enclosed, to be used as a national cemetery for the soldiers who shall die in the service of the country."

The first national cemeteries were established to bury the dead from general hospitals located near large troop training camps and to bury the battlefield dead, who had generally been buried where they fell. After the Civil War, a search was conducted of every possible battlefield, isolated churchyard, farm, or railroad siding at which the Union dead might lie. Cemeteries were established near large battlegrounds, hospitals, or prison camps and the Union dead were brought to the nearest cemetery. By 1873 Congress extended the right of burial in a national cemetery to all honorably discharged Union veterans of the Civil War. No Confederate dead were allowed burial there. By the Spanish-American War (1898), burial was available to those who died on foreign soil by disinterring the body and shipping it home to a national cemetery. Eventually burial was offered to veterans of all wars.

The New Bern National Cemetery (1711 National Avenue) was established on 1 Feb. 1867. It contains 7.7 acres of land and became closed to new interments in the early 1990s. New Bern and the surrounding coastal area fell to Union occupiers early in the Civil War. By 1862, Gen. A. E. Burnside was using the area as a base of operations for his blockade of the North Carolina coast. After the war, Union dead were moved to the cemetery from New Bern, Beaufort, Morehead City, Kinston, Hatteras, Roanoke Island, and other places along the coast. Four special monuments have been erected in the cemetery to commemorate servicemen from Connecticut (1898), New Jersey (1905), Massachusetts (1908), and Rhode Island (1909). 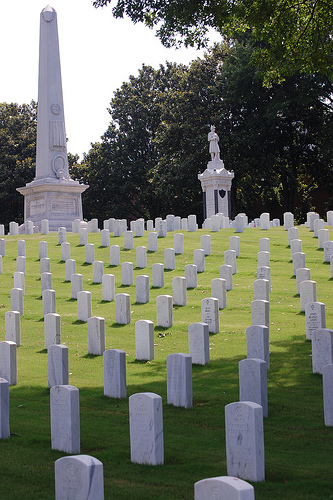 The Raleigh National Cemetery (501 Rock Quarry Road) was established in 1865 shortly after Gen. William T. Sherman's army occupied the city. It was situated on the site of Camp Green, a Union military post. Remains of Union veterans were brought there from Averasboro, Smithfield, Bentonville, Goldsboro, Greensboro, Franklin, Henderson, and other places within the state. By 2005 the seven-acre cemetery had more than 5,900 interments of U.S. military personnel, including Medal of Honor recipient William Maud Bryant, who was killed in Vietnam in 1969.

The Salisbury National Cemetery (202 Government Road) was designated a national cemetery in 1865, although Union prisoners of war had been buried there since 1863. Salisbury, the largest town in western North Carolina at the time, had been chosen to house a Confederate prison because of its proximity to a major rail center. Early in the war, an elaborate scheme to exchange prisoners of war was practiced, but by late 1864 the facility housed as many as 10,000 prisoners. That winter, over 5,000 fell victim to starvation and disease. More than 11,000 men who perished at the prison during 1864 and 1865 are buried in 18 trenches, each about 240 feet long. A monument 39 feet tall was erected to their memory in 1876. Following the end of the Civil War, 412 remains were moved to the national cemetery from Lexington, Charlotte, Morganton, and other nearby places. By the 2000s the cemetery covered 11.2 acres of land and had more than 15,800 interments. 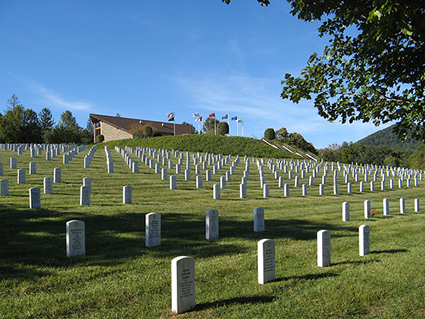 The Wilmington National Cemetery (2011 Market Street) covers 5.1 acres of land, which were purchased in 1867 and 1877. Wilmington, the last port open to incoming Confederate supplies, did not fall until February 1865. The heavily armed Fort Fisher, located about 28 nautical miles from the city, protected the harbor and the blockade-runners who frequented the port. Two major battles at Fort Fisher, which occurred in December 1864 and January 1865, left a large number of Union dead. Other deaths occurred during the Federal march from the Fort to Wilmington, during the city's occupation, and among the large numbers of prisoners of war that were sent there during the closing days of the war. Original interments in the cemetery were remains removed from the city of Wilmington, the Lutheran churchyard in Wilmington, Fort Fisher, Fort Johnson, Fayetteville, and Smithville (Southport), and from 12 miles along the Wilmington & Weldon and the Wilmington & Manchester Railroads.

By 1985 two of the four national cemeteries in the state, those at Wilmington and Raleigh, were slated to be closed to burials; those at New Bern and Salisbury were also near capacity. The U.S. Department of Veterans Affairs had decided not to enlarge or establish any more cemeteries, instead establishing a grant program to provide matching funds to states interested in building and operating state veterans' cemeteries. As of 2021, Salisbury is the only National Cemetery accepting new internments.