Located in Northampton County, Boon's (or Boone's) Mill was the site of a Civil War Federal repulse by Confederate forces under Brig. Gen. Matt W. Ransom on 28 July 1863. Boon's Mill was situated on the main road from Jackson, the county seat, to Garysburg and Weldon, where the vitally important Wilmington & Weldon Railroad ran north to Petersburg, Va. It was by this road that the Federal force hoped to capture and burn the Weldon Bridge, thus disrupting the flow of supplies from Wilmington to Petersburg, Richmond, and the Army of Northern Virginia.

Spear's arrival on 27 July, as well as Foster's the day before, was quickly discovered by Confederate intelligence. Orders were then passed to recently promoted Brig. Gen. Matt W. Ransom to move his brigade southward from its camp near Petersburg, where it had been helping to defend Richmond from Federal forces that occupied Williamsburg.

Ransom's brigade, consisting of elements of the 24th, 35th, and 49th North Carolina Regiments and two guns of Georgia Artillery, reached Garysburg around daybreak of 28 July. Ransom ordered his force of about 200 men to Boon's Mill, choosing this site because it was located on the main road running through Gumberry Swamp. The pond and swamp made it an excellent defensive position. Ransom and his staff left the men and rode to Jackson in an attempt to gather information about Spear's Federal force. On their return, one-half mile from Jackson, Union cavalry exploded from the county seat to give chase. With the Federals not more than 250 yards behind, it was literally a horse race back to the mill for Ransom and his staff, who were fired upon the entire way. Dashing across the bridge at Boon's Mill, Ransom ordered his men to take up the planks and to form ranks.

Spear brought up his artillery and shelled the Confederate position for over an hour. Then he ordered his dismounted cavalrymen to attack down the road toward the mill; however, concentrated Confederate fire broke this initial advance. Next Spear attempted flanking movements to the left and right, hoping that the dense undergrowth of the swamp would offer cover. But Ransom moved his guns forward and swept the woods with grape and canister. This maneuver, along with Confederate infantry fire, forced Spear to call off his assault after five hours of fighting. Convinced that he could not break through and aware that the entire area was aware of his presence, Spear retreated back to Jackson under the cover of darkness.

Federal casualties from the fight at Boon's Mill were listed at 11 dead, buried on the field. Confederate losses were reported as 1 soldier from the 49th Regiment killed and 3 from the 24th Regiment wounded. 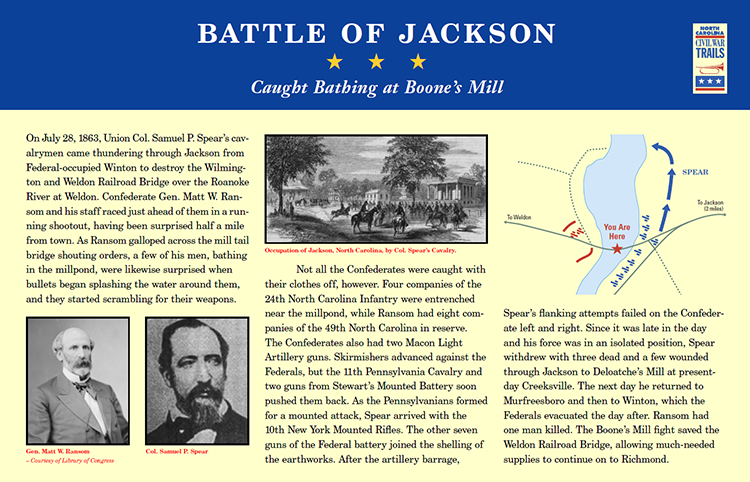