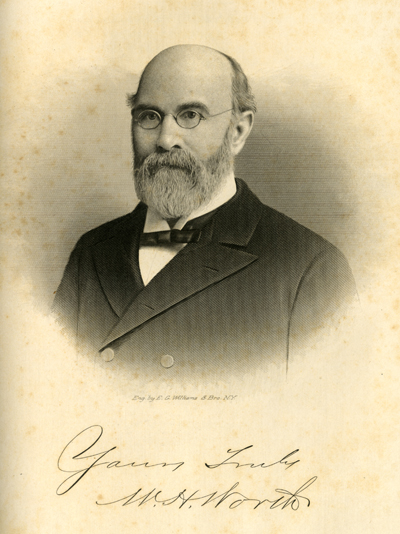 William Henry Worth, Farmers Alliance leader, was born on a farm in the Polecat Creek community in Guilford County. His parents, Hiram Coffin and Phebe (or Phoebe) Henley Worth, were devout Quakers of moderate affluence. When the boy was three years old, the family moved to Greensboro, twelve miles from their rural home.

After attending the local free school, Worth completed his studies at New Garden Boarding School (now Guilford College) from 1854 to 1856. He then worked as a carpenter to pay for his education. In 1860 he moved to Company Shops (now Burlington), where he was employed as a clerk in the mercantile establishment of the John M. Worth and Company, a firm owned by relatives and managed by his brother Daniel. He left this position when the Civil War began, declined military service because of his Quaker convictions, and worked for the North Carolina Railroad Company at Company Shops until the conflict ended.

After serving as assessor of internal revenue for the Third North Carolina District from 1866 to 1870, Worth moved eastward to Lenoir County where he farmed successfully for nearly twenty years. A pioneer member of the North Carolina Farmers Alliance on its organization in 1887, he served first as business sub-agent, then in 1889 as business agent for Lenoir County, and finally as state business agent until 1894, when he resigned to run for political office. As a Populist (he later became a Republican), he was nominated for state treasurer on the Fusion ticket and won the office. Reelected in 1896, he served until 1900, when he was defeated by Benjamin R. Lacy. At the end of his last term, it was discovered that one of his subordinates was $12,000 short in his accounts. When Worth learned of the matter, though not legally required to do so, he made good the loss with his own funds at great personal sacrifice. He then retired to the old family home in Guilford County where he lived for the rest of his life.

Worth was a faithful member of the Pomona Friends Meeting for many years and in 1899 was elected a trustee of Guilford College, a position in which he served until nearly the end of his life. He spent much of his time in horticulture, and his garden, orchard, and vineyard became local showplaces. In 1927 a grateful state paid a tribute to his honesty by returning the $12,000 he had advanced two decades earlier to cover his clerk's shortage. Though Worth had sought no reimbursement, he accepted the gift with gratitude.

On 25 Apr. 1872 Worth married Sallie M. Henley, and they became the parents of Hiram C. and Eunice L. (Mrs. Charles D. Roberts), both of Greensboro, Ruth M. (Mrs. Charles W. Petty) of Clinton, and Annie Henley (Mrs. Smith) of Westfield, Ind. He died at his Greensboro home and was buried in New Garden Cemetery at Guilford College.