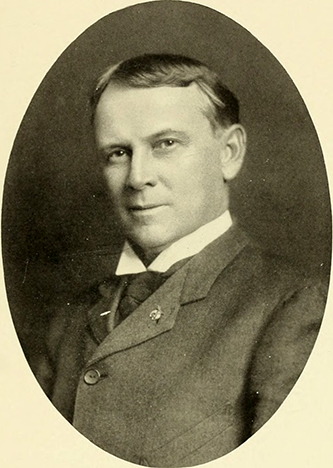 Benjamin Rice Lacy, state treasurer, was born in the old Presbyterian manse in Raleigh where his father, the Reverend Drury Lacy, D.D., was pastor for eighteen years until he accepted the presidency of Davidson College. Benjamin's mother, Mary Rice, like his father, was of Welsh ancestry, a daughter of the Reverend Dr. Benjamin Holt Rice who held pastorates in Petersburg, Hampden-Sydney, and other places in Virginia, as well as in New York City and Princeton, N.J. Dr. Rice became moderator of the General Assembly of the Presbyterian church at its 1829 session in Philadelphia.

Benjamin Rice Lacy was reared in a home where Christian piety and resoluteness of purpose prevailed under the guidance of Christian parents—the father, a great preacher and teacher of preachers; the mother, a daughter of a great preacher. The effect of such training in character was the foundation of his life of probity and civic usefulness. He received his schooling at the preparatory school of R. H. Graves in Graham and at the Bingham School at nearby Mebane. On account of the prevailing poverty during Reconstruction, he was unable to obtain the college education he wanted. Nevertheless, his learning and experience came to be so generally recognized that Davidson College in 1928 awarded him an honorary doctor of laws degree.

Having a natural aptitude for mechanics, Lacy served an apprenticeship in the shops of the Raleigh and Gaston Railroad at Raleigh. After becoming foreman, he entered the operating department of the railroad and for fifteen years ran a locomotive. Because of his innate fairness and rugged honesty, he gained the confidence not only of his fellow railroad workers and executives but also of the state's labor force generally. "Honest Ben Lacy," as he came to be known, took a commanding position in the field of labor in North Carolina. He served as an alderman in Raleigh and in 1894 as commissioner of labor and printing. In 1901 he became state treasurer, winning reelection to the post from 1904 to 1928. He also was prominent in councils of the Freemasons and in various other fraternal organizations.

In 1882 Lacy married Mary Burwell, the daughter of Captain and Mrs. J. B. Burwell; at the time, Captain Burwell was president of Peace Institute in Raleigh. The couple had six children: Mrs. R. Y. McAden, Mrs. Charles G. Rose, Frances, Nan, Dr. Thomas Allen, and the Reverend Dr. Ben R., Jr. Thomas Allen Lacy became a noted New York psychiatrist, and Ben Lacy, Jr., served as president of Union Theological Seminary from 1926 until 1956 and as moderator of the Presbyterian Church of the United States in 1950.

Lacy's concern for the welfare of working people made him a natural leader in the amicable and constructive transition of North Carolina industrial life. While he was state treasurer, and especially during the last eight years of his public service, the state embarked on an unprecedented program of financial expansion in which it became necessary for him to handle hundreds of millionsof dollars for permanent improvements. In that work he enjoyed the friendship and confidence of the nation's leading bankers. Lacy was buried in Oakwood Cemetery, Raleigh. An oil portrait of him hangs in the state capitol.