John Warren Woody, educator, college president, and religious leader, was born at Saxapahaw, Alamance County, of English Quaker ancestry, the son of Nathaniel, a farmer, surveyor, and owner of land on Haw River originally granted to his great-grandfather, and Sarah Hornady Woody. He attended Spring Friends Monthly Meeting School and New Garden Boarding School. As a conscientious objector, he left North Carolina when the Civil War began and walked to the home of an uncle in Thorntown, Ind. He was graduated from Westfield Academy in Indiana and from the Old Lebanon National Normal University, in Ohio, where he received both bachelor's and master's degrees. Woody later studied at the University of Tennessee and earned an LL.B. degree law at the University of Michigan, Ann Arbor. 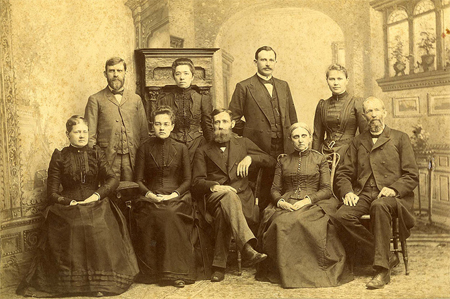 He began teaching at a time when Quaker colleges were developing across the United States. He assisted in the organization and growth of six educational institutions. In 1868 he became the first president of Whittier College in Salem, Iowa, and in 1871 he helped establish William Penn College in Oskaloosa, Iowa, serving as its first president. Returning to North Carolina in 1880 to teach at New Garden Boarding School, he was a member of the first faculty of Guilford College. After fourteen years as professor of history and instructor in surveying, natural science, philosophy, and Bible at Guilford, he went to teach in the new college at Whittier, Calif. Four years later he accepted an invitation to assist in the establishment of Friends University at Wichita, Kans. In 1899 he helped set up Slater Industrial and State Normal School for blacks in Winston, N.C. (now Winston-Salem State University).

Woody, who retired in 1908, taught with great patience and dignity, always encouraging students and showing a particular interest in plodders. He often took into his own home an unfortunate or handicapped student, giving him special attention and help. His surveying class at Guilford College, among other projects, in 1884 ran a line through the woods from Founders Hall to the Guilford depot—the location of present College Road. He was the author of A Handbook of Pedagogics (1884), History by the Topical Method (1889), and The Elements of Pedagogics (1891). His teaching of history and the Bible was enriched by travel to the Holy Land and to Greece and Rome in 1892.

A promoter of industry in North Carolina at the turn of the twentieth century, Woody founded a cotton mill at High Falls and served as president of the High Falls Manufacturing Company for twenty-five years. He constantly kept in view the development of the economic, social, moral and spiritual well-being of the employees and of the community as a whole.

Another great concern of his was to assist a number of families, both black and white, to acquire land and build homes of their own, making for a more stable community. His plan was to train them to develop and finance their own resources. As an instructor in summer institutes for teachers of both races, he tried to impress on them the importance of working for community betterment. Endowed with a well-balanced personality, he was a man of deep convictions and firm purposes but with enough wit and humor to relieve tense situations.

In 1868 Woody married Mary Chawner, then of Thorntown, Ind., a teacher with him and a Friends minister. They had three children: Hermon, John Waldo, and Alice. Oil portraits of John and Mary C. Woody hang in the foyer of Spencer Chapel at William Penn College, Oskaloosa, Iowa. Woody died at his home at Guilford College and was buried in the New Garden Friends Cemetery.