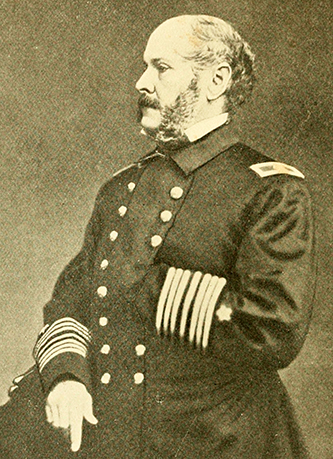 John Ancrum Winslow, naval officer, was born in Wilmington, the son of Edward and Sara Ancrum Berry McAllister Winslow. On his father's side he was descended from a prominent New England family and on his mother's he was connected with the Rhetts of South Carolina. At his father's insistence, John went to Massachusetts for schooling at age fourteen. But the boy's desire for a naval career led to his appointment as a midshipman, on 1 Feb. 1827, through the intercession of Daniel Webster.

His officer's career was fairly typical; it was marked by extensive sea and shore duty. In the Mexican War Winslow led a shore party with distinction in the capture of Tobasco in October 1846. But two months later he lost his first command in a gale. While a passenger on the USS Raritan, he became a friend and roommate of Raphael Semmes, who had suffered the same embarrassment. Illness, which sent Winslow home early in 1847, terminated his wartime services.

By his middle years in the 1850s he had come to regret his choice of profession. A confirmed Episcopalian, he turned increasingly pietistic, and, unlike many brother officers, he became an enthusiastic Abolitionist. At the beginning of the Civil War his attachments to North Carolina were virtually forgotten, and there was no question as to where his allegiance lay. When ashore he lived in Boston with his wife, the former Catherine Amelia Winslow, a cousin whom he had married in 1837. Two of their seven children (five sons, two daughters) were also navy men.

Winslow's Civil War career began at St. Louis, Mo., where he commanded the gunboat Benton under his friend, Flag Officer Andrew H. Foote. In December 1861 a freak accident, in which Winslow was struck in the arm by a piece of flying chain, deprived him of the chance to participate in the Fort Henry, Island No. 10, and Memphis operations. By the time he returned to duty in May 1862, Flag Officer Charles H. Davis had succeeded Foote. Winslow was dispatched to lead an expedition up the White River into Arkansas, but shallow water, river fever, and local guerrillas prevented his achieving anything substantial.

Although Winslow received his promotion to captain in July 1862, the choice three months later of Admiral David D. Porter, his junior on the naval officers' list, to replace Davis, as well as the Navy Department's discovery that Winslow had spoken disparagingly of President Abraham Lincoln and of General John Pope, a Republican favorite, raised the possibility that his usefulness might be over. His request for relief from unhealthy river duty got him placed on furlough—a seemingingly dead end. Winslow wrote urgently to Secretary of the Navy Gideon Welles to make known his antislavery views; apparently the explanation was satisfactory, because in December 1862 he received command of the USS Kearsarge, a third-class screw steamer with seven guns and a crew of 163.

Despite continuing poor health, Winslow insisted on proceeding immediately to Fayal, Azores, where he was to join his new command. A three months' delay there, although exasperating, was probably a beneficial tonic. Winslow formally assumed charge on 6 Apr. 1863. The Kearsarge 's mission was the prevention of European-built and -manned Confederate raiding cruisers like the Florida and Georgia from putting to sea and the interception of the famous Alabama should it try to make port and refit. A shortage of Union cruisers allowed the first two vessels to get away, and Winslow's incessant patrolling soon led to an unpleasant incident with Great Britain. In November 1863 the Kearsarge recruited some Irish hands in Queenstown; Winslow immediately released the men when the British government protested, but he insisted on returning them to Ireland rather than risking their taking service with the Confederates. By early 1864 British pressure had compelled him to rely on Spain and the Low Countries instead of the British Isles for provisioning and refitting. 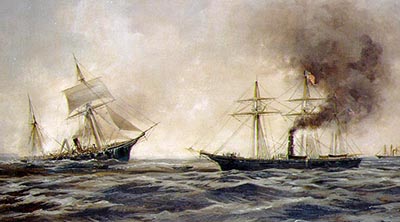 The Kearsarge was at Flushing when, on 12 June 1864, Winslow learned that the long-awaited Alabama had landed at Cherbourg; within two days he was outside the harbor. The refusal of French authority to permit Captain Semmes, Winslow's old shipmate, a long period in port for overhaul and Semmes's natural pugnacity led him to send out a challenge. When the Alabama steamed out on the nineteenth, the Kearsarge dropped well beyond the three-mile limit to avoid any diplomatic complications. Seven miles offshore she put about; the two ships made seven opposite-course circuits with the range gradually dropping to seven hundred yards. Though their specifications were virtually identical, the Kearsarge was in much better condition than her adversary, which had been long at sea and had a foul bottom and deteriorated ammunition. Winslow had taken the added precaution of strengthening his ship's wooden sides by draped spare chains; moreover his gunnery, although slower, was considerably more accurate. Except for one lucky shot, which fortunately failed to explode, the Kearsarge escaped virtually unscathed and managed to sink the Alabama. The escape of Semmes and most of his officers aboard an English yacht later became a source of regret to the Union captain because of Semmes's vindictive public pronouncements about his defeat. Unquestionably the vanquishing of the notorious raider Alabama strengthened the Federal government's diplomatic stance in Europe.

On returning home to Boston in November 1864 to decommission the Kearsarge, Winslow was voted the thanks of Congress and promoted to commodore with rank to date from his victory. He spent the remainder of the war at patriotic gatherings, on courts-martial, and in the supervision of ship construction in Boston. In December 1865 he assumed command of the Gulf Squadron for a brief period before it was merged with that of the North Atlantic. He hoisted his rear admiral's flag over the Pacific Squadron in 1870, but his ailments—he had already lost an eye due to long neglect of it at sea—forced him ashore to stay two years afterwards. He died at Boston Highlands.

A sea captain more in the dour tradition of puritan New England than of his native North Carolina, Winslow had made the most of a command that was less than his seniority called for. With it he won a dramatic naval duel in the romantic tradition of the War of 1812, one that stifled a late bid by the declining Confederacy for international prestige.

"The Battle of the Kearsarge and the Alabama."  Massachusetts Sesquicentennial Commission of the American Civil War. 2013.