Arthur Daniel Wenger, college president and clergyman, was born on a farm in Aberdeen, Idaho, the son of Frank L. and Anna Toevs Wenger, both members of the Mennonite church. His father came from a Swiss Mennonite family that had immigrated to Pennsylvania in 1717 and then to the Valley of Virginia, Missouri, Kansas, and, later, Idaho. His mother's ancestors were German Mennonites who had wandered through Russia to Turkestan, Canada, and Kansas before settling in Idaho. Wenger attended Bethel College in Newton, Kans., his father's alma mater, earning a A.B. degree in history in 1941. He attended the San Francisco Theological Seminary in San Anselmo, Calif., in 1941–42, was ordained to the ministry of the Mennonite church in 1942, and became the minister of First Mennonite Church in Shafter, Calif. 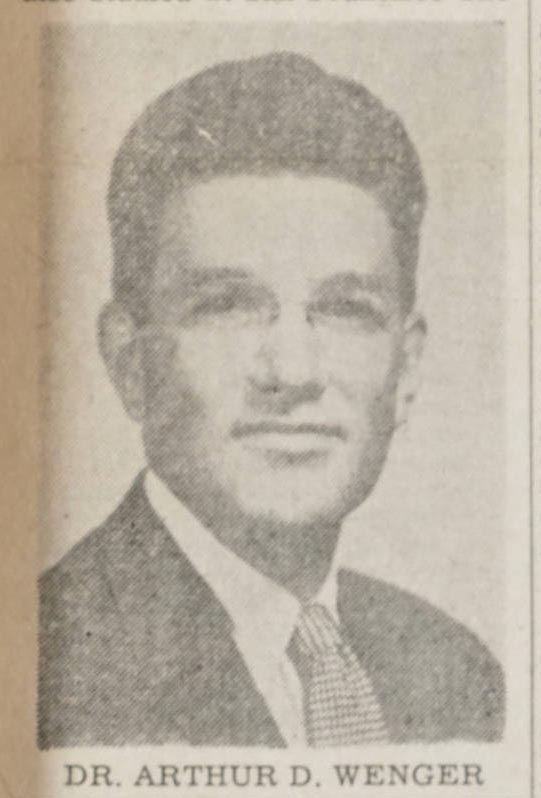 From 1944 to 1946 Wenger was a captain in the Army Chaplains Corps and served with combat infantry units in Western Europe during the final year of World War II. On his return in 1946, he was ordained to the ministry of the Christian Churches (Disciples of Christ) and attended Brite College of the Bible, Texas Christian University, earning a B.D. degree in 1948. He served the Christian Church of Hamilton, Tex. (1948–49), before becoming associate minister of First Christian Church in New Castle, Pa., in 1949.

Wenger entered the ministry of higher education in 1950, when he was appointed assistant to the president of Atlantic Christian College (now Barton College) in Wilson, N.C. He then moved to Texas Christian University as director of promotion (1952–56) and director of religious activities (1954–56).

In 1956 he was called to be the eighth president of Atlantic Christian College, a position he filled until his death in his twenty-first year in office. During the two decades of his administration he was influential in the development of the institution, in higher education in North Carolina, in civic affairs in Wilson, and in his church from the local to the national level.

Under his leadership the college, with very limited resources, developed a sound financial foundation by means of a Fifteen-Year Development Program and balanced budgets. Development of the campus facilities—four dormitories, a library, a gymnasium, a student center, and four classroom buildings—was a major achievement. Accreditation by the Southern Association of Colleges and Universities was obtained in 1956 and renewed thereafter. The programs of nursing, art, and teacher education also were accredited.

President Wenger guided the college into sound development during the educational expansion of the fifties and sixties and prepared it to meet the decline of the seventies without serious problems. He insisted that religion was not solely an academic field to be studied, but an influence to permeate the campus. A vigorous, optimistic personality, strong religious commitment, and spirit of service made a lasting impression on students and faculty alike.

In Wilson his interests included the Chamber of Commerce (board of directors), Arts Council (president, 1968–69), Salvation Army Advisory Board, Boy Scouts of America (Eastern North Carolina Council), and Wilson County United Fund. He also sat on the Wilson County Economic Development Council and was president of the Wilson Rotary Club.

On 29 May 1944 he married Doris Kellenbarger, of Kansas, a graduate of Bethel College. They had three children: Arthur Frank, Jon Michael, and Mark Randolph. Wenger was buried in Maplewood Cemetery, Wilson.

Arthur D. Wenger, "Responsible Education," response to charge at his inauguration, 3 May 1957.