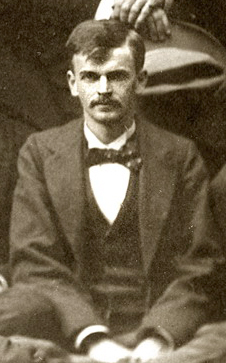 Charles Aurelius Webb, newspaper publisher, attorney, legislator, and teacher, was born in Warrenton, the son of Alexander S. and Anabelle Moore Webb. His father, whose family was long prominent in Orange, Person, and Granville counties, fought in some of the bloodiest battles of the Civil War, lost all of his holdings as a result of that conflict, and suffered severe financial setbacks during Reconstruction. Because of these difficulties, the fifteen-year-old Charles was taken into the home of his uncles, W. R. (Old Sawney) and J. M. Webb, who operated the noted Webb School in Tennessee. There he received his preparatory education before entering The University of North Carolina in 1886. Although he worked his way through the university, he was graduated in 1889 with the second highest honors in his class and received the Willie P. Mangum medal for oratory.

In the fall of 1889 Webb moved to Asheville, where he had accepted a teaching position. He continued the study of law, begun while he was at the university, and was admitted to the bar in 1891. For more than a quarter of a century he had a large and successful law practice. Regarded as one of the most resourceful trial lawyers in the region, he figured in many of the more important cases in western North Carolina around the opening of the twentieth century.

Always interested in political and public affairs, Webb, a Democrat, represented Buncombe County in the state senate in 1903, 1905, and 1907, serving as president pro tem in the last two terms. He was considered one of the best leaders on the senate floor and a parliamentarian of rare ability. In 1907 he became chairman of the Committee on Insane Asylums and was instrumental in securing passage of an appropriation for permanent improvements for the state hospitals for the indigent insane. He was named by the governor as a member of a commission to spend the funds and served as its chairman.

Earlier he had introduced and secured passage of a bill limiting the time attorneys could use in addressing juries in certain cases. He also prepared the legislation that established a separate police court of Asheville and enlarged the jurisdiction of municipal courts. Named chairman of the state Democratic executive committee in 1912, he served for a year before resigning to accept appointment by President Woodrow Wilson as U.S. marshal for the Western District. He held this position throughout the Wilson administration.

While a U.S. marshal he realized a boyhood ambition by purchasing a newspaper, the Asheville Gazette-News, an afternoon paper, in February 1916, changing its name to the Asheville Times. Three years later he and George Stephens of Charlotte bought the Asheville Citizen. Before long Webb sold the Times and, virtually abandoning the practice of law, devoted his time almost exclusively to directing publication of the Citizen.

In 1930 he bought Stephens's interest in the Citizen, and later in the year he and Don S. Elias, then owner of the Times, merged the two newspapers. Webb served as president of the Asheville Citizen-Times Company until March 1949, when, at his own request, he was relieved of his duties as president. He continued as chairman of the board until his death.

Webb served as president of the North Carolina Press Association, as a director of the Southern Newspaper Publishers Association, and as chairman of the open shop committee of the American Newspaper Publishers Association. He participated in the meeting in 1899 that launched the organized effort to establish a national park in the Southern Appalachian Mountains and labored forty years before seeing the plan realized. He served as a director of the Southern Appalachian National Park Association, which laid the foundation for establishment of the Great Smoky Mountains National Park. In 1956 an overlook about six miles from Newfound Gap along the road leading to Clingman's Dome was named for him. He also devoted much of his time and the influence of the Citizen and the Times to securing the Blue Ridge Parkway for western North Carolina. Webb was concerned about the welfare of black citizens of the community, and the Asheville Colored Hospital was largely his creation.

On 10 July 1895 he married Bruce Banks of Washington, D.C. She died in 1913 leaving four children: Charles Bruce, Robert Stanford, Julia Banks, and Mandeville Alexander. In 1914 Webb married Mrs. Jessie Close Shaw, a native of Michigan who died on 15 Nov. 1960 at age ninety-eight. Webb was buried in Riverside Cemetery, Asheville. His portrait, a gift of employees of the newspaper, hangs in the Asheville Citizen-Times Building.

Moss, Amina. A Croaker's path: Charles A. Webb, a look into the reporting of Race Related Issues in the Asheville Citizen in 1923. November 28, 2006. BA in History at the University of North Carolina at Asheville. http://toto.lib.unca.edu/sr_papers/history_sr/srhistory_2006/moss_amina.pdf (accessed July 12, 2013)