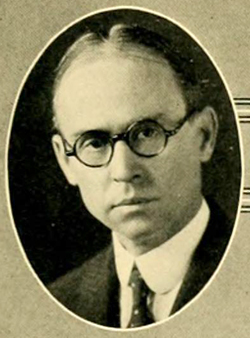 William Hane Wannamaker, educator and university administrator, was born in Bamberg, S.C., the son of Francis Marion and Eleanor Margaret Bellinger Wannamaker. His father, a scholarly planter and lawyer, saw that William was educated by private tutors and in the public schools of St. Matthews, S.C. In 1891 the young man entered Wofford College, in Spartanburg, S.C., where he lived in the home of President Henry N. Snyder, joined Chi Phi fraternity, and was graduated with Phi Beta Kappa honors in 1895. Wannamaker earned a portion of his college expenses by working during the summers as a railroad telegrapher. Among his instructors at Wofford were John C. Kilgo and William Preston Few; Kilgo was named president of Trinity College in Durham, N.C., in 1894, and Few joined the Trinity faculty as professor of English in 1896. After his graduation from college Wannamaker was a school principal in Mullins, S.C., for a year before becoming principal of the first public high school in Spartanburg, a post he held for four years.

In 1900 W. P. Few invited him to enroll at Trinity College as a graduate student and instructor in English and German. After receiving an A.M. degree from Trinity the next spring, Wannamaker entered the graduate school of Harvard University, where he studied German and earned a second master's degree in 1902. Although offered a faculty position at Trinity College, he first spent additional time studying at Harvard and at the universities of Berlin, Tübingen, Leipzig, and Bonn before accepting the post of professor of Germanic language and literature at Trinity in the fall of 1905.

Wannamaker soon became known as an effective and dedicated teacher, but, with some misgivings, he became increasingly involved in the administration of the college. When Few was named president of Trinity in 1910, Wannamaker joined the school's administrative committee. In the summer of 1917 he became dean of the college. This duty was delayed briefly by military training in 1918 at Plattsburgh, N.Y., where he earned the rank of second lieutenant and was named adjutant of the Trinity College detachment of the Student Army Training Corps. As dean, Wannamaker was responsible for such areas as curriculum and student life. A stern but fair disciplinarian, he took a personal interest in the welfare of each student. After assuming the deanship, he remained an active member of the German department for several years.

In 1926, two years following the metamorphosis of Trinity College into Duke University, Wannamaker was name vice-president in the Division of Education and dean of the university, responsible for its academic activities, including faculty recruitment and development. He also continued as dean of Trinity College, now the undergraduate men's unit, until 1942. Under the "triumvirate" of President W. P. Few, Vice-President Robert L. Flowers, and Wannamaker, Duke University became a respected leader of higher education in the South.

In addition to his administrative duties, Wannamaker was an editor of the South Atlantic Quarterly (1919–55) and for many years headed the university's faculty committee on athletics. In the latter role he was largely responsible for the growth and success of the school's intercollegiate sports program. He brought famed football coach Wallace Wade to Duke and supported the construction of new athletic facilities, but he was equally concerned about the proper relationship between academic and athletic affairs. He represented the university in the Southern Conference and for several terms was president of that rule-making athletic body.

Active as well in civic affairs, Wannamaker served on the Durham County (1916–18) and city (1923–47) boards of education; he was chairman of the city board for twenty-two years (1925–47). He was a trustee of Durham's Watts Hospital and an active Rotarian. During World War II he was a member of both the university and state Councils of Defense.

Wannamaker was small in stature and unassuming by nature, but his industriousness and diligence made him a most successful administrator. He was awarded honorary degrees by Wofford College (Litt.D., 1917) and Duke University (LL.D., 1953). On his retirement in 1948 he was named vice-chancellor of Duke University, an advisory post with lifetime tenure. A dormitory and a roadway at Duke are named in his honor, and a portrait of "Dean" Wannamaker, given by former students, hangs in the Duke University Library.

Wannamaker married Isabel Stringfellow (d. 1957) of Chester, S.C., on 30 June 1903. They had four children: Margaret Elizabeth, William Hane, Isabel, and Harriet Foote. Wannamaker, a Democrat and a Methodist, died in Pinebluff and was buried in Maplewood Cemetery, Durham.