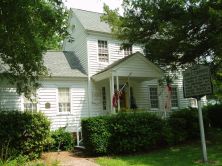 John Franklin Tompkins, Jr., agriculturist and physician, was born in Edgecombe County, the son of John F. and Rosanna Spruill Tompkins. His mother's brother, George Evans Spruill, was a graduate of Yale University and for several sessions represented Halifax County in the House of Commons. Richard Hines, an uncle by marriage, was a member of Congress. The father of young Tompkins died when he was an infant, and he was reared by his mother and her relations. He attended The University of North Carolina for the session of 1840–41 from Nash County, where his mother was then living. After leaving the university he studied medicine, though where is unknown.

By 1847 Dr. John Tompkins had located in Washington, Beaufort County, and there became a close friend of William L. Kennedy. He acted as second for Kennedy in his duel with Fenner S. Satterthwaite, also a resident of Washington. The duel, arising out of a political argument, was fought at Spring Church, Greenesville County, Va., twenty miles north of Halifax, N.C., on 24 Feb. 1847. Bishop Joseph B. Cheshire, in his book Nonnulla, published the documents relating to this duel, including letters written by Tompkins in his capacity as second, as an example of the duelling code of the antebellum period. Tompkins had great admiration for Kennedy, and when his only son was born in 1850, he named him William Lee Kennedy Tompkins. The boy died in childhood.

In 1846 Tompkins married Caroline Crawford Bonner, the daughter of Joseph and Sallie Ann Crawford Bonner of Bath. By the time of the census of 1850 he had left Washington and was residing in the former rectory of St. Thomas Church in his wife's native town. He appears to have given up the practice of medicine and to have turned his attention to agriculture. It is likely that in the course of his medical studies, Tompkins had some exposure to chemistry, then a new science. In April 1852 he brought out in Bath the first issue of the Farmer's Journal, published monthly and devoted to "improvements in agriculture, horticulture and the household arts." Principally because of the initiative taken by Tompkins, a meeting was held in Raleigh in October 1852 at which the North Carolina Agricultural Society was organized. Plans were made to hold a state fair the following year.

Though Tompkins was the most able of the editors of farm journals appearing in the state at the time, the publication was not a financial success. In an attempt to improve this situation, he moved to Raleigh in August 1853. There he rented a house near the city called Sharon, which was owned by Thomas Ruffin, a major supporter of his efforts. In addition to editing the Farmer's Journal, Tompkins taught elementary, agricultural, and experimental chemistry at the well-known J. M. Lovejoy Academy in Raleigh and made himself available to farmers who wished to bring soil for analysis. His financial plight did not improve, and by the third volume, William D. Cooke, proprietor of the Southern Weekly Post, had bought the Farmer's Journal. By the last issue, in December 1854, Tompkins had turned the editorship over to Cooke, who continued publication the following year under the name, Carolina Cultivator. Cooke incurred heavy losses in taking over the Farmer's Journal.

Late in 1854 Tompkins sold all of his household furniture and surrendered his Raleigh lease. He disappeared from the North Carolina records at this time, and his later career and the date of his death are unknown. According to the records of the Bonner family, however, he was survived by two daughters: Sallie and Rose Spruill who later married, respectively, Bennett Flanner Mayhew and Marion Grubbs.