Simon Bruton Taylor, Confederate officer, merchant, public official, and farmer, was born on a farm in southern Lenoir County, the son of Stanton and Nancy Bruton Taylor. His father died when Simon was seven years old, and he and an older brother contributed to the family's support. The brother opened a store in Kinston and Simon became his helper. The younger Taylor also became a member of the local militia and afterwards was identified with "The Onslow Rough and Readies" in Onslow County not far from his birthplace. 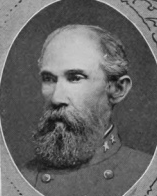 On the eve of the Civil War these men constituted Company A, Thirty-fifth North Carolina Regiment, and received training at Camp Mangum near Raleigh. He was commissioned first lieutenant on 6 Sept. 1861. The regiment first came under fire in March 1862, when New Bern fell to the enemy. The regiment was reorganized, and Taylor became captain of Company A on 21 Apr. 1862. Following the victory at Chancellorsville, 2–3 May 1863, he was promoted to major on 15 June and served with the regiment in battles in Virginia. His old company participated in the many exchanges of Harpers Ferry, as it changed hands repeatedly. In these exchanges, the men of Company A were among those who waded the James River three times in nine days. Following the battles at Antietam and Fredericksburg members of the regiment expressed their sympathy for the people of the area by raising a large collection for the relief of those who had lost property and supplies during the battles.

The regiment returned to North Carolina to participate in the liberation of Plymouth on 20 Apr. 1864 and expected to be involved in the freeing of New Bern soon afterwards. Instead, it was called to help defend Richmond, while Plymouth shortly was retaken by Union forces. During this time, however, Taylor was advanced to lieutenant colonel on 18 June 1864. At Five Forks in Virginia about 1 Apr. 1865, he received a serious bullet wound in the arm and leg, was captured, and held prisoner. Nevertheless, he was given excellent medical attention and later expressed gratitude for his treatment.

Three of Taylor's brothers were killed in action, including Guilford, with whom he had expected to return to the mercantile business. Taylor moved to Onslow County to be among those with whom he had served in the war and opened a store on the shore of Catherine Lake. It flourished and for more than sixty years was a major enterprise of the area. He engaged in the naval stores trade, providing employment and a market for countless small producers. He also lent support to an academy that was established in the community, and he served as a county commissioner, county treasurer, and a justice of the peace. Although farming was merely a sideline with him, he practiced advanced methods for the time and supported the Farmers Alliance.

In 1866 Taylor married Sallie Murrill, the daughter of a leading plantation owner near Catherine Lake. They had three daughters: Annie, Mattie (died in infancy), and Lucy Bruton. Taylor was a member of the Disciples of Christ. After the death of his wife as a result of an uncontrollable runaway horse, Taylor married the widow Nancy Murrill Hoyt.