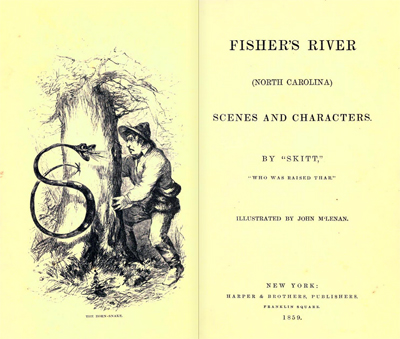 Hardin Edwards Taliaferro, humorist and preacher, was born in Surry County, the youngest of nine children of Charles and Sallie Burroughs Taliaferro. The Taliaferros, their surname an anglicization of the Norman-French Taillefer, established themselves in England about 1200. The American branch came from Robert Taliaferro, an immigrant to Virginia before 1645. Brothers and sisters of Hardin, known in his youth as Mark Hardin, were John, Elizabeth, Charles, Mary, Richard, Dickerson, Benjamin, and Sallie. In the mountains of Surry County, the well-to-do Taliaferros, linked by ties of friendship and marriage to the family of Governor Jesse Franklin, were leaders in cultural and political affairs. Young Taliaferro worked at the local tub mills, read books from the large library of his neighbor Meshack Franklin, observed the unrestrained antics of the natives, and listened to their tall tales. In 1829 he followed his older brothers Charles and Richard, both Baptist ministers, to Roane (now Loudon) County in eastern Tennessee, where he became a tanner and farmer. Two years later he was baptized and attended an academy in nearby Madisonville, where in 1834 he married Elizabeth Henderson and was ordained to preach.

He moved to Talladega, Ala., in the fall of 1835 and for the next twenty years served a number of churches in the Coosa River Association. Beginning in 1849, Taliaferro passed through a "great spiritual conflict," the nature of which he disclosed in his first book, The Grace of God Magnified (1857). "Salvation by grace and grace alone was ever thereafter his perpetual theme," reported his brother-in-law Samuel Henderson, also a Baptist preacher. By January 1856 Taliaferro had located in Tuskegee to assist Henderson in editing the weekly South Western Baptist.

In the summer of 1857 he returned for the last time to Surry County, a visit that sparked memories of his boyhood days along Fisher River. Back in Alabama, he began "to write down some of the scenes and stories of that age and section" in a series of comic sketches published as Fisher's River (North Carolina) Scenes and Characters, by "Skitt," "Who Was Raised Thar" (1859). The book is one of the most joyous expressions of antebellum Southern humor. In using the actual names of his friends and acquaintances, however, Taliaferro did not endear himself to the Surry County folk, whom he called "a healthy, hardy, honest, uneducated set of pioneers." Even his proud boast that he was one "raised among them who knows their worth every way" was insufficient apology for hilarious yarns in which uncultivated yokels told staggering (if delightful) lies, fought, got drunk, and indulged themselves in outrageous shenanigans. In Tuskegee, the pseudonym "Skitt" protected the laughter-loving author of Fisher's River from being identified as the prominent Baptist editor and churchman.

In 1862 Taliaferro gave up his editorial post at the South Western Baptist but stayed on in the Tuskegee area for a decade as minister to several churches. He then moved back to Loudon, where he died. He was survived by his wife and two married daughters, Nancy J. Ham and Adelaide Weaver.