Samuel Henderson, pioneer and western agent, was born in the Nutbush area of Granville (now Vance) County, the fourth son of Samuel and Elizabeth Williams Henderson. His father was commissioned sheriff of Granville County on 6 Mar. 1754. A brother, Judge Richard Henderson, was a principal of the Transylvania Company, which engaged in the purchase and settlement of lands in the area of present-day Tennessee and Kentucky. Nothing is recorded of Samuel's education. Extant letters disclose a well-developed vocabulary but rudimentary skill in written expression. In September 1768 he served with the Granville regiment of militia dispatched to maintain peace at Hillsborough during the Regulator incidents there. These centered around the operation of the colonial court conducted by his brother Richard and other officials appointed by the government at New Bern.

Samuel accompanied Richard to Kentucky in 1775 and was present when the Treaty of Watauga or Sycamore Shoals was concluded during 14–17 March. Under this treaty, the Transylvania Company, consisting of speculators chiefly from Orange and Granville counties, acquired claim to lands in the Tennessee and Kentucky areas by purchase from the Cherokee nation. Samuel was among the original party of settlers of the lands obtained under the treaty, and he served as a representative for the settlement of Boonesborough in the legislative assembly convened by the settlers on 23 May 1775. 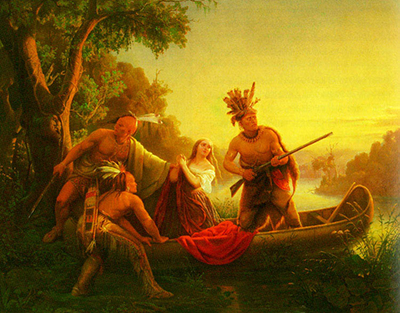 In July 1776 Frances and Elizabeth Callaway (daughters of Colonel Richard Callaway) and Jemima Boone (daughter of Daniel Boone) were abducted by Indians. Samuel Henderson was one of the party that rescued the women. The incident, one of the most celebrated in the early history of Kentucky, has been cited as the source of the abduction in James Fenimore Cooper's Last of the Mohicans. Henderson married Elizabeth Callaway at Boonesborough on 7 Aug. 1776, the first wedding recorded to have taken place in the Kentucky settlement.

Henderson returned to North Carolina about 1777 and settled in Guilford County where he became prominent, especially in the local militia. Despite this relocation, he continued to participate in the western settlement. On 3 July 1779, the Council of State commissioned him commissary to the detachment of militia accompanying the boundary commission for extension of the North Carolina-Virginia boundary westward; the council authorized an initial draft of £10,000. This effort continued into the next year and was largely conducted for North Carolina by his brother Richard.

On 13 May 1780 Samuel participated as a signatory in the adoption of the Cumberland Compact at French Lick (now Nashville, Tenn.). This document was the original instrument of government for the settlement area. In October of that year, he served as a captain of the Guilford County militia in the suppression of an insurrection in Surry County. And, in the following spring, he fought at the Battle of Guilford Court House, 15 Mar. 1781.

By 1782, Henderson had lost possession of the property he had obtained in the western lands under the Transylvania Company, and most of his coadventurers had been killed or dispersed. For the next twenty-five years, his activities were concentrated in North Carolina. On 3 June 1784 he was appointed a tax collector for Guilford, and during the next several years he participated in various capacities in the formation of Rockingham County. He served on the commissions that drew the boundaries and erected the courthouse and prison.

In 1784, Henderson was dispatched by Governor Alexander Martin to convey official communications to the disaffected western settlers who had formed the state of Franklin under the leadership of General John Sevier. Martin's letter of appointment instructed Henderson to ascertain whether the secession of this area from the state was intended to be permanent or temporary, and whether it was supported by a majority or by only a few leaders. Henderson executed this commission in the spring of 1785 and conveyed official responses of the legislature of Franklin and of General Sevier declining to stop the secession and stating the westerners' grievances. In 1807 Henderson moved to Tennessee, where he died at McMinnville in Warren County.

The Career of Colonel Samuel Henderson (1938).