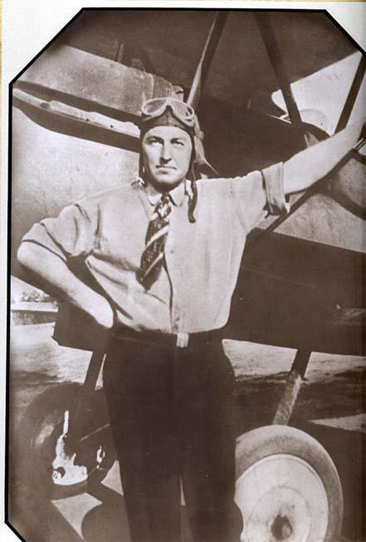 George Alton Stewart, pioneer aviator, was born in Buies Creek, Harnett County, the son of George Washington and Sally Jackson Stewart. He was educated in the schools of Buies Creek and at Coats High School. As an automobile mechanic in Coats, he became interested in the airplanes that flew over from Pope Field at Fort Bragg. When a military pilot made a forced landing in a cotton field near Stewart's shop, the young mechanic was able to make the repairs necessary to get the plane in the air again. Making friends with the pilot, he was invited to visit the airfield and there his interest in flying was encouraged. He bought an army surplus Flying Jenny in a crate and assembled it, and under the direction of his new friends at Pope Field he became an aviators' mechanic. Lieutenants Russell G. McDonald and Edmund P. Gaines, military pilots, taught him to fly.

On 17 May 1924, after just six hours of training, he flew solo; soon afterwards he acquired a wrecked plane that he repaired. Licensed in 1926, Alton Stewart was referred to in contemporary newspapers as the first North Carolinian to receive a civilian pilot's license. The Aviation Department of the Department of Commerce, created in 1924, licensed civilian aviators. Early records of licenses granted, however, were destroyed a number of years ago when they were deemed to have no further value, so the fact of his priority probably can never be officially established.

Stewart was instrumental in the creation in 1926 of the first flying field in Raleigh, where he moved the following year. He became the chief pilot of Carolina Airways, Inc., with headquarters in Raleigh, and also offered flying lessons. Because of his acclaimed record for skill and safety, he was frequently called upon to transport state officials on business. News and Observer reporter Ben Dixon McNeill engaged Stewart to fly him on assignments, and the newspaper printed McNeill's early aerial photographs taken from Stewart's plane. Stewart participated in air races and won numerous cups, citations, and other awards. He appeared at fairs around the state to take passengers on short flights and occasionally was engaged to fly businessmen on cross-country trips. Even before moving to Raleigh he began publishing The Air News as a supplement to the Dunn Dispatch to publicize civilian flying. The first plane known to have landed on Roanoke Island was piloted by Stewart, an accomplishment in which he took considerable pride. One of his passengers at that time had witnessed the Wright brothers' first flight. In 1928 Stewart assisted the Prudential Insurance Company of America with its investigation of aeronautical hazards for insurance purposes.

In 1916 he married Reva Mae Jones, and they became the parents of Luther Harold, Geraldine Gretchen, and David Wallace. At age thirty-two Stewart was killed in a plane crash at Dunn when flying with two passengers, one of whom was a student pilot. He was buried in the municipal cemetery at Coats.